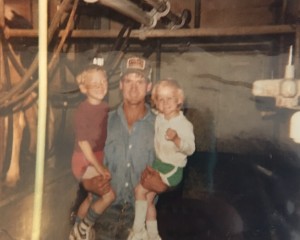 Ramie with her dad and brother in their dairy barn when she was young.

Many people visit De Smet, South Dakota to get a glimpse inside the life Laura Ingalls Wilder’s family and to learn about the prairie. Others, like Latham Hi-Tech Seeds’ own Ramie Coughlin, have lived it.

Ramie (pronounced Ray-me) grew up on a farm near De Smet and always enjoyed working outside. Her family raised a lot of livestock including dairy cattle, stock cows and horses. She showed dairy and horse projects in 4-H and competed in 4-H Rodeo. She also competed in FFA contests, including Parliamentary Procedure, Land Judging, Job Interview, Horse Judging and Dairy Judging at the district, regional and state levels. She participated in the 4-H Queen contest, as well.

Beef cattle were her FFA supervised ag experience (SAE), and her outstanding SAE project work led Ramie to earn the American FFA Degree. Each year to less than 1% of FFA members earn the American Degree, making it one of the organization’s highest honors. 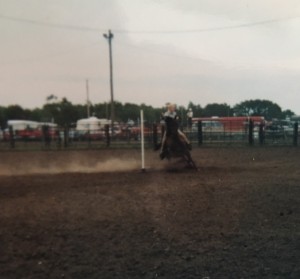 “In high school, I was very undecided about what I wanted to do. I considered going into the medical field,” says Ramie. “A couple weeks after graduation I realized there was no way I could go to a job where I would sit inside all day, every day, listening to music on low volume. I immediately switched schools and changed my major to Ag Business. Years later I still feel it was one of the best decisions I ever made.”

Ramie naturally leaned toward animal agriculture while attending Lake Area Technical Institute in Watertown, which is one of the nation’s Top 4 technical schools. She was introduced to agronomy through a college internship and ended up working for four different agronomy centers during college and following graduation. Her jobs after college evolved into more specific product sales, and in 2009, she moved into her full-time seed sales position. Ramie has been the first female seed seller hired by two of her employers.

“Sales is challenging no matter who you are or what you sell,” says Ramie. “I’ve learned that I really need to know what I’m talking about, proving to my customers that I’m someone worth working with. As a woman, you must work hard and stay strong. It’s important to never make assumptions. Ask questions, and if you don’t know the answer to a grower’s question, research it.

Most of the challenges I have encountered are the same that all sales people face: getting appointments without cancellations; getting growers to make a buying decision; overcoming objections; and battling the competition.” 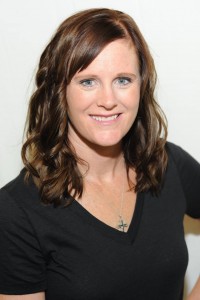 One reason Ramie says she decided to join Latham Seeds is because she really enjoys working for a family-owned company with access to the industry’s best genetics and technology. She says the Latham brand is known for quality, and the company has a great reputation.

With a one-year-old daughter and a baby on the way, Ramie appreciates the flexibility that comes with the territory. She says she also appreciates the opportunity to grow a relatively undeveloped sales region and looks forward to the opportunities she has with Latham Seeds. She also hopes to set an example for her children like her mother did for her.

“My mom is my biggest role model and one of my biggest supporters. She has always pushed me to do my very best no matter the situation. She has always lived her life for her family and the farm/cattle. That woman could out work me any day of the week! I really admire her,” says Ramie.

“My advice for girls interested in an ag career or in ag sales is ‘Go for it!’,” says Ramie. “The marketplace is very welcoming to women in ag, and you will find much less push back in the country than I saw 10 years ago when I started.”