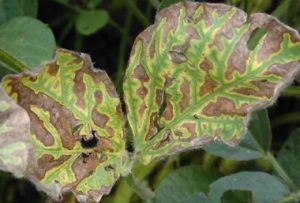 It was feared the wet, cooler weather conditions in 2018 would be ideal for Sudden Death Syndrome (sds) infestations. This soil-borne fungus overwinters in fields. Although it does not affect corn plants, it can survive in corn residue and then attack soybean fields in subsequent years. Based on what I have seen as I’ve traveled across Latham Country, the infestations do not seem to be as severe as feared. I’m finding Brown Stem Rot (BSR) is more prevalent in fields than it has been in recent years. Foliar symptoms of SDS and BSR are almost identical. To tell the difference between the two, you must split stems and dig up roots. I make this point because I believe many reported cases of SDS should be attributed to BSR.

Why hasn’t Sudden Death been a larger problem this year? To confirm my theories, I called Dr. Daren Mueller, an Iowa State University Extension Plant Pathologist. Dr. Mueller also has observed less evidence of severe SDS and said his colleagues from neighboring states are seeing less SDS pressure, as well. The following are some of Dr. Mueller’s thoughts on possible reasons for this:

» DELAYED PLANTING: The Sudden Death fungus attacks soybean roots as early as the V2 stage. Wet, cool weather favors SDS infestations, but such conditions also prevent soybeans from being planted very early. It has been proven by numerous researchers that one way to combat SDS severity is to plant later. Once farmers were able to get soybeans planted this spring, the temperature had turned very warm. Warm soil temps in early May caused soybeans to emerge quickly, lessening the chance of root infestations.

» SDS TOLERANCE: Seed companies, in general, have done a better job of developing cultivars with improved tolerance to Sudden Death. Dr. Mueller was quick to point this out as a management strategy that is working well. At Latham Hi-Tech Seeds, we’ve been focusing on SDS as part of our IRONCLAD™ defensive package since 2013. (IRONCLAD is available exclusively from Latham Seeds.)

» COMPACTION: Farmers are doing a much better job of reducing compaction in their fields by waiting for soils to get fit before they’re worked. Research proves the SDS fungus thrives in compacted areas of fields.

» SEED TREATMENTS: Products like ILeVO® are an important tool in the fight against SDS. Dr. Mueller stresses that while ILeVO is very good, it is not a “silver bullet” for preventing SDS. My experience with Latham research shows soybeans treated with ILeVO yield an average of 4 to 8 bushels per acre (bu/A), and it is effective 70-80% of the time.

Effective management for SDS includes all the above factors plus more going forward. At Latham Seeds, we strive to be on the forefront of the battle against this disease and other yield-robbing pests that affect your yield and bottom line.