Pass the Raw Octopus but Hold the USDA-Certified Meat… Say What? 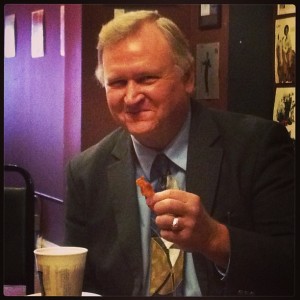 It’s been a few weeks since I’ve written a blog. Truthfully, it was a nice break. The issues keep coming, however, so our work as advocates is not done! Sometimes I question whether my blogs make a difference. Then I think about all the misinformation being distributed and all the misperceptions out there, and I realize that farmers must keep telling their sides of the story!

Shortly after the new year began, I received a link to CNBC article about the six things you’ll be eating in 2017. I was expecting my favorite food – BACON – would make the list. Instead the first food listed was poke (pronounced po-kay), which is made traditionally made with raw octopus and tuna. After visiting Japan last year, I knew this wouldn’t make my list for 2017!

I was beginning to wonder why my friend sent me this link until I read further… number 5 on the list is “organic, antibiotic-free and hormone-free food.” As I read this segment of the article, I knew this reporter had never even talked to a farmer nor anyone who knows what’s in food.

The Food and Drug Administration (FDA) does NOT allow retailers to sell meat with unsafe levels of antibiotics. The FDA and U.S. Department of Agriculture’s Food Safety and Inspection Service (FSIS) regulations require a withdrawal period from the last antibiotic treatment until the animal enters the food supply. Even 4-H members who raise livestock are required to take a course to learn how to correctly administer antibiotics, as well as to learn about withdrawal requirements. The FSIS also performs random meat tests nationwide to ensure no antibiotics are present above the limits set by the FDA.

Furthermore, the FDA’s Center for Veterinary Medicine reports that the appropriate use of antibiotics reduces the risk of unhealthy animals entering our food supply. When restaurants like Panera tout they serve only meat from animals that have been raised without antibiotics, it’s not a selling point to me. I’m not unnecessarily concerned with eating animals that have been given antibiotics, but I am concerned about eating unhealthy animals!

You’d think Americans would understand the importance of keeping farm animals healthy as the vast majority has no qualms about giving their pets antibiotics. People and their pets use 10 times more antibiotics than animals in livestock production, according to the Animal Health Institute (AHI). Perhaps this is the very reason consumers mistrust the use of antibiotics in animal agriculture!

It’s a myth that using antibiotics for animal health makes antibiotics less effective on human bacterial infections. Apparently so many people believe the myth that very strict regulations went into effect on January 1 of this year. ALL uses of antibiotics in feed and water for food animals must be prescribed by a veterinarian, and every use must be documented. Once again, farmers’ production costs go up unnecessarily. More paperwork is required, and more time is spent inside our office that could be spent outside taking care of our animals.

Let’s also set the record straight about hormone-free food products here today. Hormones are naturally present in all milk, whether it comes from a cow or a goat. Even plants need estrogen to grow. There’s no need to buy chickens or turkey with the “hormone-free” label as U.S. federal regulations do not permit the use of hormones in poultry production. I could go into more detail here, but why belabor the point?

Bottom line: Americans enjoy the safest, most cost-effective food supply in the world. Enjoy your food, even those trendy foods if you so desire. That reminds me…