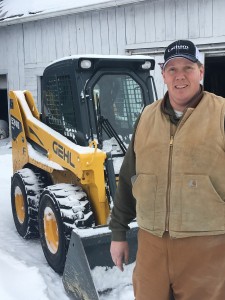 Latham® dealer Adam Faust of Chilton, Wisc., is one of five finalists for the 64th Wisconsin Outstanding Young Farmer (OYF) Award that will be presented January 27-29, 2017, in Baraboo. The OYF award is based 50 percent on progress in ag career, 25 percent on soil and water conservation, and 25 percent on contributions to community, state or nation.

Adam has been an exclusive Latham dealer for 14 years, plus he milks 70 primarily registered Holstein cows and raises about 500 acres of crops. He’s also active in several community and civic organizations. He’s president of the Calumet County Forage Council and has been largely responsible for planning both its 2016 and 2017 annual conventions. Adam has served for several years on the county dairy promotion board. He’s a member of Farmers Union and the county Holstein breeders organization, as well.

This sounds like a lot of hard work for anyone, but it’s especially admirable when you learn that Adam was born with spina bifida. This condition results in a baby being born with an open spinal column and exposed spinal tissues. Although the spinal opening can be surgically repaired, nerve damage is permanent and results in varying degrees of paralysis in the lower limbs. Because people with spina bifida have mobility issues, many are in wheelchairs.

Mobility issues obviously present unique challenges to farmers, so Adam has become a volunteer and advocate for AgrAbility. AgrAbility partnered with Easter Seals and the Wisconsin Division of Vocational Rehabilitation (DVR) to help Adam realize his dream of farming independently. For example, custom steps were built to make it easier for Adam to climb into the tractor cab. AgrAbility also provided bins, so Adam no longer has to lift 100-pound bags of feed for the calves and heifers.

AgriAbility, DVR and Easter Seals – as well as input from dairy industry mentors – helped Adam implement a major renovation to his barn and parlor. Work began the day after the 2016 World Dairy Expo ended in October, and it came together in about two months. Adam milked cows in his new facilities for the first time on Christmas Day 2015. 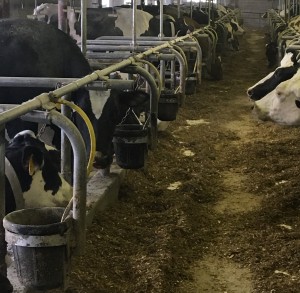 “I knew the stalls in our old facility were too small to be comfortable for the cows I wanted to milk. I didn’t want to raise smaller, more compact cows. I favor big, powerful cows that are good at converting forage into milk. Why try to change what the cow naturally is?” says Adam. “When it came down to it, I realized I didn’t want to milk more cows. I just want to milk better cows, so building a big new facility didn’t make sense. I had to find my way own forward.”

Modifying his family’s dairy facilities had been on Adam’s mind since 1999, when he completed short courses in both Agronomy and Dairy from the University of Wisconsin – Madison. He researched popular dairy systems in Europe and Canada. He visited state-of-the-art systems throughout Wisconsin, and he sought input from his friends and industry leaders including Tom Kestell, whose cow set the world record for milk production in 2013 and again in 2016.

“I was talking with Tom (Kestell) one day and he said, ‘There’s nothing wrong with your barn walls and roof. What’s in the middle can be changed. There’s no better environment for a dairy cow than a tie-stall, so let’s design what you need’,” said Adam. “Who am I am to argue with that? So we made a plan.”

Deep bedded stalls cushioned with a byproduct of paper recycling provide the ultimate in cow comfort, are sustainable and turn landfill waste into useful bedding. Fibers that are too small for paper production get sifted out, mixed with fine lime and used to make animal bedding. 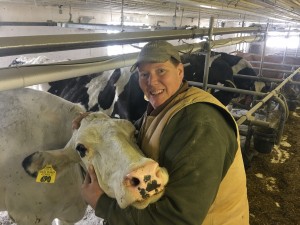 “A local company started doing this about 10 years old and has refined its product over time,” says Adam. “It’s extremely popular in our part of the state because we have a large paper industry and a large dairy industry. Twenty semi loads per day of paper byproducts go to farms now rather than landfills! It’s sustainable, as well as economical, plus it’s great for the cows.”

Another change Adam made to improve cow comfort was installing tiled mangers. “I don’t know anyone who would rather eat off concrete instead of a plate, so it made sense to me that cows would prefer eating off a smoother surface,” says Adam. “My cows eat more and the feed stays fresher on the tile.”

The use of technology allows Adam to tell if there’s something wrong with a cow before she knows she’s not feeling well. New milk units have sensors that communicate with dairy management software in his farm office. All of his dairy herd improvement (DHI) testing is wireless, meter-less and in-house.

Additional technology allows milking equipment to ride on a track, which eliminates Adam from having to carry anything or crossing the gutter. Adam says this system is very popular in Canada and Europe. He also toured two Wisconsin dairies where the tract system is used.

Adam is passionate about everything from new seed technologies to the genetics in his dairy operation, so it was no surprise to learn he earned the Wisconsin State Farmer Degree. He also won the FFA Gold Proficiency Dairy twice. We congratulate him on being named a finalist in the Wisconsin Young Farmer Award and wish him the best of luck at next week’s conference!

To help promote the high quality dairy products Adam produces, today we’re sharing a smoothie recipe that he developed with a friend. It incorporates RumChata because the dairy co-op to which Adam belong markets its milk for the production of RumChata and Culver’s Frozen Custard.

SIDE NOTE: If you’re never before tried it, consider making RumChata hot chocolate. Just add 2 oz. of RumChata to 6 oz. of your favorite hot chocolate. It’s a great way IMO to warm up on a cold winter’s evening. #nightcap

Blend the ice, milk, Crème de Cocoa and Rumchata in a blender until smooth. Top with real whipped cream and cinnamon if desired.