Dan Goll of Garner feels blessed that he and his wife, Traci, are raising their three children in the house where he grew up in rural Garner.

“I always knew that I wanted to farm, but I started farming full time even sooner than I thought,” says Dan, who graduated from high school in 1987. He attended North Iowa Area Community College 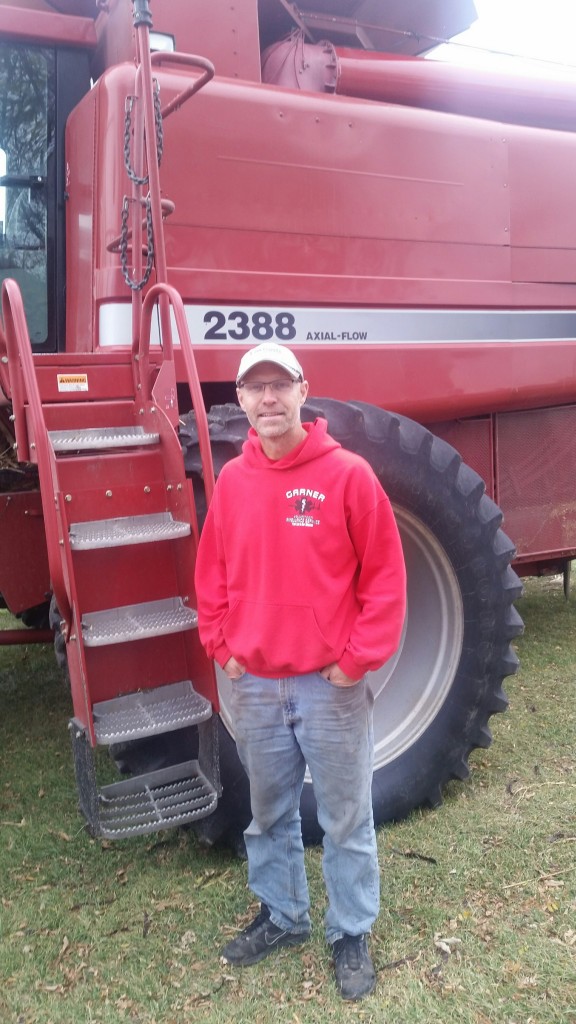 (NIACC) for two years and started farming full time in 1990 due to his father’s health issues.

“I love putting in crops in the ground and watching them grow,” says Dan. “My favorite time of the year is when you just see the rows appear in the fields. It’s the same with livestock. I love it when calves and pigs are first born. You have to make sure that calf gets up and nurses and that the pigs get dried off and get something to eat. These times are what I love about farming.”

Dan grew up raising cattle and hogs still enjoys feeding them. He and his children also raise crossbred show pigs and Boer goats.

“Our kids have learned to accept responsibility at a young age,” says Dan, a proud father of three. The Goll’s oldest son, Alek, is a senior in high school. Erik is a freshman in high school, and Emma is a fifth grader. “They have to manage their time. They have school activities, extracurricular activities like sports, 4-H and FFA plus homework. They also have animals that require their time and attention, so they have to figure out how to find time to get everything done.”

Raising livestock teaches kids a lot about life. On the day before the Golls were supposed to leave for the Iowa State Fair, Alek’s barrow died. Any loss is tough, but it’s especially tough when a kid has spent countless hours working with an animal and preparing it for the show ring. Alek was disappointed, of course, but he also knew these types of things can happen. He told his dad, “That’s part of having livestock.”

Another advantage of being involved in 4-H and FFA is the opportunity to develop leadership skills. Alek has served as secretary and vice president of his FFA chapter. He has also served on the Junior 4-H county council and now on the Senior 4-H county council. Erik has been vice president of his 4-H group. He’s also been very active with First LEGO League, where youth in 3rd through 8th grades build and program robots out of Legos that perform multiple tasks, and with First Tech Challenge (FTC), a more advanced robotic program. Both Lego League and FTC are interests Erik developed through 4-H. Emma served as Hancock County Fair Princess in 2014. She enjoyed showing livestock for the first time at the 2015 county fair and is looking forward to her second year as a member of the Concord Challengers 4-H Club.

“The relationships you form through 4-H and FFA are so important,” says Dan. “You get to know people. You travel to places you might not otherwise go. And you learn to think about others and to get involved in your community.”

Giving back to his community remains important to Dan. He has served as an EMT on the volunteer ambulance crew for 22 years. He’s also very active in his church and has served as Sunday school superintendent, trustee, vice chairman, and chairman. He and his wife also led the senior youth for the past five years until a fulltime DCE (Director of Christian Ed) was hired this fall. In addition, Dan has traveled to Haiti on a mission trip where he helped build homes through the Global Compassion Network.

“Traveling to a place like Haiti really reminds a person just how blessed we are to live where we do,” says Dan. “I loved growing up on a farm. Even though my wife grew up in town and has worked her entire career as a nurse, she says she can’t think of a better place to raise a family than on a farm. I hope our children have fond memories of the time we’ve spent working together.”

One of the fondest memories Dan has from his youth is silage harvest with his father and cousins. They took turns eating at one another’s house, depending on where the fields they were harvesting were located. When it was her turn to provide the harvest meal, Dan’s mom always made Scalloped Eggplant. You might say it was her signature dish, so today Dan is sharing that treasured family recipe on TheFieldPosition.

Add a little water and cook till tender.

Mix together and put back in shells. Place on cookie sheet and sprinkle with crushed saltine crackers.