Flying the Fields with Ryan Skaug

Thanks for tuning into TheFieldPosition on Thursdays! Last week we started a new eight-week series on how Upper Midwest farmers are using drones (aka unmanned aerial vehicles or UAVs) in their farming operations. They’ll be sharing tip and tricks on everything from buying a drone to flying one. If you have specific questions you’d like answered, please send them to us via Facebook Messager, tweet them to @LathamSeeds or email shannonl@lathamseeds.com.

Flying the Fields with Ryan Skaug 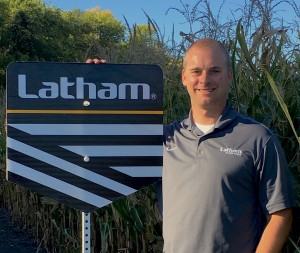 Knowledge is power. That’s why this fifth generation corn/soybean farmer in northern Minnesota and in the eastern Red River Valley believes drones are very useful to a farming operation.

“Being a young farmer and seed dealer, I like to be on the cutting edge of new technology,” says Ryan Skaug, a Latham Hi-Tech Seeds dealer, who started flying three years ago. He purchased the DJI Phantom II because he liked its ease of use and he could get it serviced nearby.

“The more I fly, I more uses I discover for the drone. I use my drone to look at fields all season long.”

In early spring, Ryan likes to see where excess water is logged within field ditches or in potholes that can be connected to larger bodies of waters or mains to increase field productivity with lesser, saturated soils. The AGPS Ditch Pro gives him more accurate in-season photos. Ryan studies the ditch and slope of the ground to create more efficient water runoff.

Later in the season after the crop has canopied, he looks for persistent water issues. Ryan likes to use the drone to take full field photos, and overlay them maps of the fields’ soil types. After harvest, he compares the full field photos (foliage) and soil type maps with yield maps.

“I believe overlaying the maps helps me choose seed products on a field-by-field basis,” says Ryan. “We’ve been able to increase our yields in not only productive soils, but also the less productive, and more challenging soils.”

There isn’t much drainage tile in the Skaug’s area, but they installed grid tile on a 310-acre field with 80-foot line spacing. This particular field has multiple soil types. It also has very heavy underground water pressure because this parcel is so close to the ridge of the Red River Valley. The drain tile has allowed plants in this field to develop better roots and has increased overall crop health. In adverse years, they can see where the tile lines are by flying the drone.

With heavier soils in the Red River Valley, compaction is an ongoing battle. Drone images show the stressors of compaction. 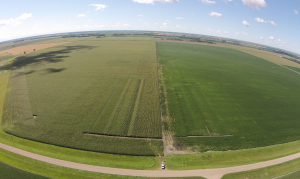 “By flying the drone throughout the growing season, I’m able to see where some emergence may be uneven due to tillage compaction,” explains Ryan. “Compaction might results if a spring tillage pass was performed when the soil was too moist or the operator might have driven too fast or worked too deep. Some soils may allow the operator to work multiple passes before planting and not show any crop damage, while others may only allow a ‘one and done’ tactic.”

“The more we know about our fields and crops throughout the growing season, the more successful we will be in many years to come,” adds Ryan.