Kellie for Ag: Finding Her Voice in Agriculture 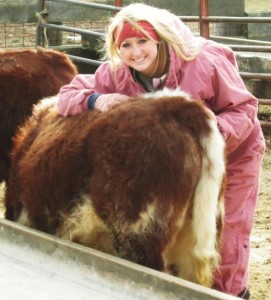 According to the United States Department of Agriculture, women make up approximately 30% of all farmers in the United States. However, #FarmHers are sometimes an overlooked demographic. Kellie Gregorich, an eastern Iowa cattle producer, is doing everything she can to ensure that doesn’t continue.

Kellie grew up raising and showing Hereford and Shorthorn cattle in eastern Iowa. When she was in third grade, her class had to draw what they wanted to be when they grew up. She proudly announced that she was going to be “Farmer Kellie.” That dream didn’t fade, and it still hasn’t today. As she got older, Kellie became active in 4-H and FFA. She particularly enjoyed communications, photography and showing her beef cattle.

The more she showed cattle, the harder it became for Kellie.  After years of getting attached to her steers, Kellie decided that she would no longer name them. That resolution didn’t last long though. Kellie’s dad started calling one of her show steers “Buddy,” and the name stuck. She recalled that tough moment when loading her beloved market show animal on the semi-truck after the last show of the season.  When Kellie took the halter off Buddy and walked off the truck, empty show halter in hand, Buddy followed her.

“It’s hard for me to raise cattle sometimes,” says Kellie. “I know what their purpose is in life, but that doesn’t make it any easier to say goodbye to the animals you spend countless hours working and preparing for show.”

Kellie, along with many other women in agriculture, will face this dilemma for the rest of their lives. “It’s something I thrive on and enjoy doing,” She says. “Farming will be something that I do for the rest of my life.”

Kellie’s fiancée has beef cattle, too. “He has black certified Angus cattle and red tractors,” she says with a laugh, “and I have red Hereford and Shorthorn cows and green tractors.”

Kellie isn’t just a farmer, though. She’s a trained floral designer and social media guru with her own blog, aptly named Kellie for Ag. She started blogging in 2013 when “fluffy cows” were all the rage on social media channels. A topic that Kellie was passionate about, she was encouraged to blog about it by a fellow woman in agriculture advocate. To read Kellie’s inaugural blog post, click here!

Through her blog, Kellie found her “agvocating” voice. She shares her glimpse of farm life for consumers and agriculture advocates alike to see on Facebook, Instagram, Twitter and Pinterest. Follow along for cute photos of Shorthorn and Hereford calves and the adventures of Otis the Bull!

From the barnyard to the blogosphere, Kellie Gregorich is putting agriculture on computers and phone screens and in the minds of consumers. The future of the American agriculture industry is sure to be bright with farm-strong women like Kellie in the fields and in the digital world.

Brown the beef. Take out the grease. Add rest of the ingredients. Kellie likes to rinse out the bottle of ketchup and add that to the dish. (While you're making your sauce, don't forget to get your spaghetti noodles ready!) Let the sauce simmer for about 15 minutes in order for the flavors to soak into the meat.