This time of year farmers demonstrate how strong their faith is. Just imagine spending thousands of dollars on little seeds and putting them into the soil! Watching little corn plants grow is quite amazing. That’s why today I’m going to talk about maize, which is another name for corn. 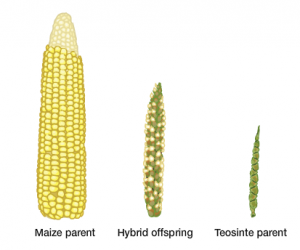 Corn originated at least 7,000 years ago in Central Mexico from a plant called teosinte. About the only similarity teosinte has to modern day corn is that it also is a grass. Teosinte was a scraggly looking plant with seeds, or kernels, that look nothing like the big ears of corn I grow today.

Corn as we know it today would not exist if it weren’t for the humans that cultivated and developed it. Farmers nurtured teosinte, and this whole process can be called genetic improvement. All living things today have gone through some sort of “modification process.” You might be surprised to see the changes that have occurred to wild carrots, bananas and watermelon!

Dr. Kevin Folta, Professor and Chairman of the Horticultural Sciences Department at the University of Florida, does a good job explaining how/why genetic improvements are made for GMO Answers:

“Some crops do just fine from genetic improvements obtained through traditional breeding. Those don’t need any GMO assistance. The GMO process just adds a gene or two that add a missing (and important) trait. If you have a good foundation, you don’t need the extra support. That’s important because the testing and deregulation process is long and expensive.

Therefore, most plants are not amenable to GMO technology, purely for economic reasons. The rigorous regulation, the high cost of R&D, the massive cost of testing and commercialization — these factors strongly deem most plant products unfit for transgenic (GMO) alterations. A trait added has to provide a significant savings for farmers or a huge advantage to consumers in order to be worth pursuing. It takes a long time to make back the R&D/deregulation costs…

The only plants in which GMO is applicable for commercialization at this time are those that benefit from a trait that can’t be produced through traditional breeding, and those with a significant possibility of economic return and long-term relevance of the added trait.”

Corn is one crop where GMO versions are available. We choose to plant GMOs to save crops from costly insect infestations or disease. Let’s go a step farther, and look at the different kinds of corn: popcorn, sweet corn and field corn. The very sweet and tasty corn we call sweet corn is very different from the corn I raise that’s used to feed livestock like my pigs or to produce ethanol. Popcorn developed as man found specific uses for different kinds of corn.

Most of the corn raised across the Corn Belt has been developed to feed our livestock. As mankind evolved, people improve their diets by adding meat proteins. Studies show that proper nutrition has played a key role in improving human health and increasing life expectancies. The first thing a developing nation today wants is better nutrition, and meat protein is the big ticket! U.S. meat exports are important to our economy.

This is why, when the government tries to spend us back in to prosperity, it simply doesn’t work. To have a successful economy, you must create wealth. New wealth comes from the earth like minerals, including coal and oil, trees, and crops. Growing corn fits that bill here in the Midwest! We can only eat so much popcorn or sweet corn, but we have proven that field corn – and the meat produced when it’s fed to livestock – creates new wealth.