Life Skills Are “Caught” through 4-H 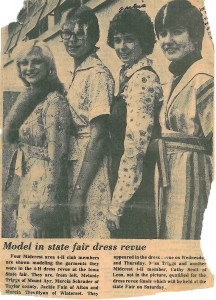 After graduating in 1980 from Iowa State University, this Union County native moved north when she accepted the position of Livestock Feed Sales with Farmer’s Cooperative in Iowa Falls.  One of her livestock feed customer, Roger Dohlman, soon captured her attention and the two were happily married in 1982.

Today Roger and Jackie Dohlman live on an acreage just south of Hampton where they raise corn and soybeans, as well as a small flock of sheep.  It’s also where they raised three kids:  Becky, age 30, lives with her husband, Jeremy Vietor, in Arizona with their daughters, 6-year-old Madison and 3-month old Gabriella; Nathan, age 28, lives with wife, Lili, near Hampton with their three children, 5-year-old Natalie, 4-year-old Eva and 2-year-old Matthew; and youngest daughter Danielle, age 23, lives in West Des Moines.

“My kids will tell you they had no choice but to belong to 4-H because I’ve been the county youth coordinator in Franklin County Extension for the past 16 years,” says Jackie with a smile.  “But I they would tell you they got a lot out of the 4-H program!  They enjoyed getting to know other youth in their local club, and as they grew older, they made lifelong friends from across the county and state.  Their 4-H projects allowed them to learn some skills from Mom & Dad that we probably wouldn’t have taken the time to teach otherwise.  Eventually they got over the jitters every time they had to stand in front of the club to give a presentation and took pride in their community after hours of doing things like picking up trash along the highway or painting buildings on the fairgrounds.  They also gained skills that helped them prepare for their careers.”

Oldest daughter, Becky, is an instructional assistant for the Dysart Unified School District in El Mirage, Arizona.  She’s also taking courses to finish her degree in psychology.  Son Nathan served as a squad leader in the U.S. Army from July 2003 to August 2010.  He’s currently taking ag classes at Ellsworth Community College and helps his dad farm.  Danielle graduated from Wartburg College and works for Barnes & Noble in West Des Moines. 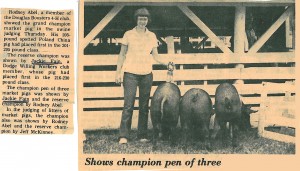 Through 4-H, the Dohlman children had the opportunity to try many different projects over the years.  They choose to develop their skills in a few projects as they got older.  Becky showed hogs plus exhibited clothing and home improvement projects.  Her passion became Food & Nutrition, and she won the State 4-H Project award in that area.  Nathan showed sheep all through 4-H and also tried his hand at wood working and welding, which he stills enjoys and uses today.  Dani’s real passion was horticulture and food & nutrition.  She had a lot of fun taking horticulture exhibits to the Iowa State Fair and earned the State 4-H Project award in that area.  Dani also discovered her talents in performing before an audience at Share-The-Fun during the county fair, which led to a degree in Theatre Arts.

“I never had to worry about where my kids were, who they were with, and what they were doing – at least not until they got their driver’s license!” says Jackie.  “They learned what the word ‘work’ meant as we spent a lot of time as a family in the fields, walking beans, picking up rocks, working with livestock projects, and helping around the house.”

One reason Jackie decided to become the youth coordinator for Franklin County Extension is because she had such a positive experience with the 4-H program during her formative years.  She showed hogs and took exhibits in food & nutrition and sewing.  She also served on the Union County 4-H Council, went on trips to 4-H Conference in Ames and Kansas City, plus attended Citizenship Washington Focus(CWF) in Washington, D.C.

In her spare time, Jackie enjoys putting her sewing skills to use by making clothing and costumes for her grandchildren.  She also enjoys gardening and baking.  Jackie sells produce and baked goods at local farmers’ markets, so she’s sharing one of her favorite sweet bread recipes with us today.