Grounded in Grit: How the “Farmer Way” Cultivates Timeless Principles for Success 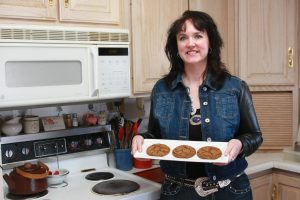 “Unprecedented” is a word that gets tossed around today when we face massive changes, like the swift outbreak of the coronavirus. It’s easy to get wrapped up in the moment during these unnerving times. When we pause to take the long view, however, we can gain valuable perspectives by considering the four essentials— family, farming, food and faith —that have guided and sustained us in the past. 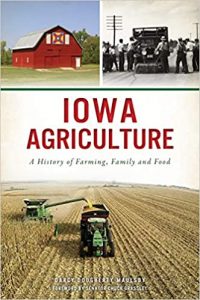 Those four themes kept emerging as I wrote my latest book, Iowa Agriculture: A History of Farming, Family and Food. I call them the “farmer way.” For generations, American farmers have lived by an unwritten code centered around hard work, courage, perseverance, teamwork, personal responsibility and concern for the community. If you could sum up the farmer way in one word, it’s grit.

Farmers 100 years ago needed this grit more than ever. I think of my grandfather Glenn Dougherty, who was born in 1897 on the family farm north of Lake City, Iowa. He came of age during “long depression” that started in the 1920s, a decade before the Great Depression engulfed America. 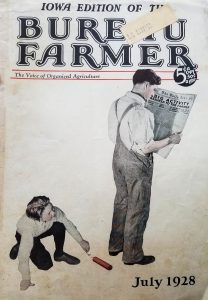 What a swift, shocking change this was from the Golden Era of Agriculture that started in the early 1900s and culminated with World War I. By then, all sectors of the American economy were producing as much as possible to help the war effort, and ag exports boomed. In the years just after World War I, however, prices for farm goods fell by half, as did farmer income. Banks did not renew notes, but mortgages and bills still came due.

Farm income fell from $17.7 billion in 1919 to $10.5 million in 1921—nearly a 41 percent drop. In Iowa, farm values that had almost tripled between 1910 and 1920 plunged during the 1920s. A rural depopulation took hold as families, especially the younger generation, left the farms to seek more opportunity in America’s cities.

In response to these troubling developments, some farmers began organizing with their neighbors so their shared concerns could be heard at the county, state and national level. Farmers like my grandfather Glenn could turn to new groups like the Iowa Farm Bureau Federation (IFBF), which had formed on December 27, 1918, to help farmers harness the power of grassroots support. By working together with their family and friends, farmers had faith they could accomplish big goals that no individual could achieve alone, especially in tough times.

The powerful influences of family, farming, food and faith that have guided the farmer way for generations also shaped the lives of rural women like Evelyn Latham, who grew up on a farm near Latimer, Iowa.

“My story is one of love and hard work, interspersed with joys, tragedies, achievements, and a lot of family pride,” said Latham (1916-2014), who taught in Franklin County’s rural schools, played a key role in the Latham family’s seed business for years and was named an Iowa Master Farm Homemaker of the Year in the early 1960s.

Evelyn and her husband, Willard, founded Latham Seeds near Alexander, Iowa, in 1947. Evelyn ran the “office” from the family’s kitchen table in addition to raising the couple’s five sons. Evelyn was known for her cooking skills and hospitality, and it wasn’t unusual for her to feed a room full of hired men and customers.

Changing for the better

Even though much has changed in agriculture through the years, as reflected in the stories, photos and recipes in Iowa Agriculture: A History of Farming, Family and Food, the farmer way still thrives in rural America, thanks to people like Evelyn and my grandfather who lived these principles daily and passed them on. The touchstones of family, farming and faith are values we can all share today, no matter our role in life, to help us succeed together. Gaining a better understanding of our rich agricultural heritage gives us a solid place to start.

One upside to this coronavirus pandemic is that everyone is spend more time with their families. From the looks of my Facebook feed, many families are spending more time gathered around the table. People are making do with the food that’s in their freezer and the ingredients in their pantries. “Make do” has been the farm cooks for generations, so today we’re sharing a classic dessert recipe that uses common food items.

Pat two-thirds of this mixture in the bottom of a 9-inch by 13-inch cake pan. Spread softened ice cream on top. Sprinkle remaining cereal mixture on top. Freeze.