When Steven and Charlene Sandven of Humboldt got married in 1982 and moved onto a West Central Iowa farm, they had no idea its history would lead them to Uganda as they celebrated their 33rd wedding anniversary. Their story is one that weaves together two families across three different continents.

Steven’s great grandfather, Magnus, borrowed money from Lars Mandsager to emigrate to the United States from Norway. Magnus helped Lars farm, plus he worked as a tailor’s apprentice in Fort Dodge to earn additional money to pay back the loan. This tract of land transfers back and forth between the Mandsager and Sandven families throughout the years.

Fast forward to Fall Harvest 2015. Steven and Charlene are in the midst of harvesting soybeans 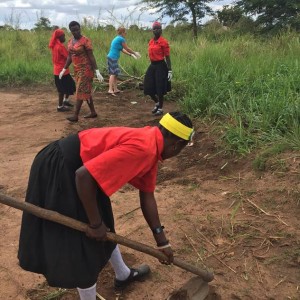 Tilling, planting and harvesting is all done by hand at ChildVoice Uganda

when they received a call from Conrad Mandsager, CEO and Founder of ChildVoice. Conrad and his younger brother, Neil, were born in Cameroon where their father was a medical missionary. Conrad graduated from Marshalltown High School and played football at Wartburg College in Waverly, Iowa. Conrad returned to his family’s Humboldt County farm, but his entrepreneurial drive led him to explore farms in the Northeast. He’s now a consultant in New Hampshire, and the Sandvens rent the Mandsager family’s Iowa farm land.

Regardless of where Conrad is hanging his hat, his heart is with people in Africa. He was moved by the women and children whose voices were silenced by war in Uganda. “The Lord’s Resistance Army began kidnapping children to become soldiers and women to be used as sex slaves. For 20 years, the rebels abducted an estimated 30,000 children from their homes in Northern Uganda and forced them to commit violent acts upon villagers.”

In 2006, ChildVoice pioneered a unique community model to provide hope and opportunity for adolescent girls in northern Uganda because returning child soldiers and sex slaves were not welcome in their home villages. Years of war had left their home communities traumatized and facing abject poverty. “The second generation impact of war remains,” read the organizations website, “and our young students today still face many challenges.”

One challenge is making the model community self-sustaining. Several fields, or large gardens, have been tilled and planted. The women primarily grow peanuts and vegetable crops like white sweet potatoes, beans, potatoes, okra and white, waxy corn that they call maize. They also grow watermelon. A few local men are hired to raise some chickens and a few pigs to supply ChildVoice with meat and eggs. A fish pond also has been built to raise tilapia, so they can raise their own fish as well as sell some.

Another challenge is teaching these women and children life skills, so they can become self-supportive. Women living in the village become apprentices in one of these areas: cooking for a restaurant, which is referred to as a hotel there, hairstyling or tailoring (seamstress). The Sandvens hope farming may be added, so the women may choose grain or livestock farming as a life skill. (As a sidebar, click here to read how one Iowa farm women has helped female farmers in Uganda.) 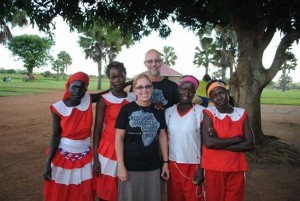 Steven and Charlene Sandven greeted upon arrival at ChildVoice Uganda

During their two-week stay last October, the Sandvens helped make physical improvements to facilities around the mission. Steven and Charlene also used their farming skills to evaluate the maize program. They learned the maize is yielding only about 10 bushels per acres! The maize is being planted in hills at a plant population of about 18,000 per acre (although the local measurement is hectares).

To demonstrate how more plants – and higher yield – could be achieved, the Sandvens taught the women how to plant in rows. They demonstrated with sweet corn, planted at a population of 32,500 plants per acre. They formed one measuring stick that was about 8 inches long for seed spacing and a 20-inch stick for row spacing.

Soil fertility is also key to improving yield, so soils have been tested on the ChildVoice farm. The next step in achieving higher production is going to be adding nutrients to the soil. Plans are in the works to begin using nutrients from the rabbit hutch and fish pond as fertilizer.

Of course, higher yield also means the villagers need to look at developing infrastructure. All labor is manual at this point. Should they consider oxen and equipment or purchase small farm machinery? Should they expand their land base? These are questions being pondered now by the ChildVoice board of directors, four of whom traveled with the Sandvens in October to Uganda along with five representatives from Lutheran Church of Hope in West Des Moines.

This group also traveled to nearby villages to see how well graduates of ChildVoice were doing on their own. One graduate had opened her own bakery next to another woman, who sells beans and rice that is delivered by a farmer in bulk bags. Then locals use measuring cups to buy what they want from the roadside market. Another ChildVoice aluma works as a cook in a hotel, or what Americans would call a restaurant. A third graduate has her own salon, and a fourth graduate married a farmer from another tribe.

“It was so rewarding to teach them things they could use to improve their lives,” says Charlene. “We hear the expression, ‘Another day, another dollar.” We’ll it’s true for these ladies! They earn so little, but they’re learning how to take care of themselves and their children.”

The women the Sandvens met last fall in Uganda are just a few of the success stories being told as ChildVoice celebrates its 10th anniversary in 2016. Those interested in helping can contact ChildVoice International or an associated ministry through Lutheran Church of Hope.

In honor of the Norwegian heritage that brought together the Mandsager and Sandven families three generations ago, today we’re sharing a recipe for Kringla. Kringla seem to magically appear on the tables of those with Scandinavian heritage either on Thanksgiving and Christmas. The Sandvan family enjoys these pretzel-like pastries so much that Charlene freezes them to have on hand throughout the winter.

As empty nesters with four adult children, Charlene says having casseroles and desserts in the freezer is a real life saver. Their oldest daughter, Brandy, lives nearby with her husband, Cody, who farms with Steven and Charlene. Brandy and Cody have two children. Brittany and her husband, Reed, have one son. The Sandven’s daughter Chelsea is a senior at the University of Northern Iowa, majoring in in Criminology and Psychology. Their youngest son, Skyler, is freshman in Aerospace Engineering at Iowa State University.

Both Steven and Charlene’s families come from Norway, so today their sharing their recipe for one of their favorite comfort foods with us!

Preheat oven to 400 degrees. Roll heaping teaspoon of dough into a long rope, then shape into the figure 8. Please on greased cookie sheet. Bake for 10 minutes or until light golden brown.