See a Common Denominator with Problems Facing the U.S.?

It’s so difficult to choose a topic each week for this blog. Honestly, it’s tough for me to pick just one! That’s why this week I’m going to touch on several subjects:

First… Ag in the Classroom. Do you know what your children or grandchildren are really learning in school? You might be shocked to learn The Omnivore’s Dilemma is being used as a textbook for all subjects – even art – for sixth graders in the Mason City public schools! Not only is this book very critical of modern farming, but Omnivore’s Dilemma is filled with half-truths and misinformation.

Last September I found myself facing a dilemma: 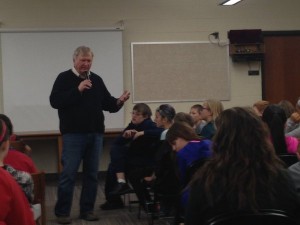 Should I combine my soybeans or head into the classroom to try and dispel the myths and correct the misinformation contained in that so-called “text book”? I whole-heartedly believe that concerned citizens, including farmers, must get involved in classroom education. So last fall, and again last Friday, I joined staff from North Iowa’s Ag in the Classroom program to meet with Mason City sixth grade students.

Ag in the Classroom does such a great job of getting into schools throughout the region that most of these kids were very familiar with our program, and many students recognized Linda and Brenda right away. The students asked great questions again this year. One question stood out this year. One young lady asked if I’m lonely out there on my farm. I couldn’t help but wonder if she’s seen a television commercial for that “Farmers Only” dating site!

I had a great time talking with the kids, and I’m encouraged that this school system will consider using “No More Food Fights!” as a textbook in the future. Written by food and farm advocate Michele Payn-Knoper’s (pronounced “Pain – Ka-nope-r”), “No More Food Fights!” is the first-ever book to speak to all sides of the food movement in an attempt to bridge the divide between farmers and consumers.

Second… Empty pews in Iowa churches. In last Sunday’s The Des Moines Register was an article about empty pews in rural Iowa. The number of people who said they patronize a local church or place of worship declined in 96 of Iowa’s 99 counties from 1994 to 2014!

The country church my wife and I attend is experiencing just the opposite of what this article reports. In fact, we’re in the process of finishing a new addition to handle all the people! Growth is truly a great “problem” to have.

Our youngest granddaughter was baptized on 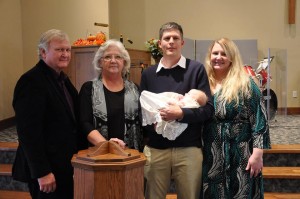 Sunday, Oct. 25. During the service, the kids performed a song with the bell choir and sang two more songs. The front of the church was almost wall-to-wall kids! I’m not going to even guess how many kids were in attendance under one year of age, but let me just say, it was a noisy service! But believe me, I’m not complaining about such joyful noise. After all, “If you don’t hear crying, your church is dying.”

So why is it that so many churches are quiet? The percentage of Americans who identify themselves as “Christian” dropped from 78.4 percent in 2007 to 70.6 percent in 2014, according to the latest survey on religion by the Pew Research Center. During this same time period, however, the number of American unaffiliated with any organized religion rose from 16.1 percent to 22.8 percent. Non-Christian faiths rose slightly, too.

I wonder if some of the problems this country is facing today are are related to those empty pews. If I were a betting man, I’d bet there is a direct correlation!

Third… The World Health Organization (WHO) made a claim that processed meat “definitely” causes cancer and red meat “probably” causes cancer! People really need to read more than just the headlines of these stories! While this WHO claim sounds alarming, it’s important to distinguish how confident the International Agency for Research on Cancer (IARC) is that red and processed meat cause cancer, not how much cancer they actually cause. To really understand what this means (and doesn’t mean), a blog posted yesterday by the Cancer Research UK advises us to understand the categories of risk.

For example, salami, sausage and smoking all received a “1” level of risk for causing cancer. However, 86% of all lung cancers have been linked to smoking while 21% of bowel cancers have been linked to eating processed and red meats. (It makes me wonder how low the risk really is when “processed” is separated from “red” meats. Yes, even data can be interpreted to influence public opinion!

Linking bacon to smoking is really absurd! What nutrition is there in smoking?

“Research has continuously shown that beef can and should be part of a healthy balanced diet,” posted agvocate Ryan Goodman on I Am Agriculture Proud. The available scientific evidence simply does not support a cause and effect relationship between any type of red or processed meat and any type of cancer.”

Healthy humans need to consume many kinds of food, and eating red meat definitely has nutritional benefits. I will definitely write more about this topic in the future!

Fourth… Climate Change. An Oct. 24th article by Richard Oswald in Iowa Farmer Today outlines how climate change will affect family farmers! As I have always said, “The climate is always changing!”

Although Osward makes it sound like all change is bad, I don’t view it this way. Warmer temperatures help plants emerge from the ground quicker, and later frost dates can help more plants reach full maturity before harvest. A longer growing season could lead to higher yields, which are needed to #feedthe9. With our world population predicted to hit 9 billion people by 2050, how will there be enough food unless yields increase so we’re able to produce more food on less farm land?

Farming practices have evolved over time, and changes will continue because technology is always evolving. Remember the so-called “good old days” when farming required lots of manual labor from lots of family members because we didn’t have modern technology? Plowing the ground black was somewhat a source of pride as you were considered doing a bad job of farming if there was a corn stalk showing after you plowed! Lots of manure was spread back then, and most of it was spread close to the barns because it took too much time with horses or slow tractors to haul it to fields that were further away. No manure management plans were written. We needed lots and lots of tillage to control weeds because there weren’t herbicides and pesticides.

By revisiting the past, we can gain appreciation for the future. Change – and adapting to change – is a constant. We must change with it. For the governments of the world to break many great businesses or force entire industries out of existence because their computer model says certain thing might happen is ludicrous!

There’s a lot of information out there. Sort through it, question it, and do some research. Most importantly, use common sense when making decisions for yourself and your family!