Field Notes Made Now Can Help Prioritize Fields for Harvest

Week after week, in our Wednesday crop reports, we’ve reported the amount of rainfall that has been received from eastern Iowa to Nebraska and up to North Dakota. Continuous rainfall prolonged the planting season and made it a challenge for farmers to apply herbicides in a timely manner. Now we’re seeing the effects that wet weather has had on root development and stalk strength.

Sunday’s wind and rain events across Latham Country caused corn to lodge in many fields. Hail damage, disease and other factors could put crop standability at risk. If this happened in your area, make notes now and take that damage into consideration as fall harvest approaches.

Warm, moist soils are great breeding grounds for weeds and pathogens. That’s why so many farmers are considering whether to apply fungicide.  Mud that cakes on leaves and stalks from ponding or flooding encourages fungal and bacterial diseases to attack damaged plant tissue. If damage is severe enough, the plants won’t live through the growing season. That’s why farmers will be consulting their seed product guides and talking with local dealers to see on which hybrids fungicides are “highly recommended” or “recommended.”

Knowing what has caused stalk lodging helps determine the best course of action. Four common cause of lodging include: (1) Weather, (2) Insects, (3) Diseases and (4) Other Stresses like extreme soil moisture or drought, nutrient deficiencies, and corn-on-corn rotations to name a few.

More than anything, we’re seeing shallow roots developing as a result 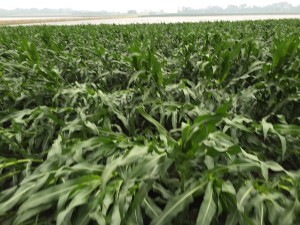 of this spring’s wet weather. Saturated soils inhibit roots from developing deep into the soils. We’re also seeing poor root formation in fields that were planted too wet as soil compaction prevents roots from growing down into the soil.

Root function deteriorates in saturated soils, making the corn more prone to green snap and root lodging. The risk of green snap is exacerbated because right now corn plants are growing so quickly given our hot, humid environment. Weak roots also predispose these corn plants to late-season root and stalk rots. Fields will need to be monitored; during September and October, harvest-strategies may need to be modified. Careful scouting now and prioritizing fields for harvest according to condition can help prevent field losses due to low stalk quality.

Even before we received this last rain event, scouting was going to be more critical than ever this growing season because this crop has been stressed since seed went in the ground. Seed corn planted into wet soils is prone to problems throughout the growing season such as: stunted plant growth; slow infiltration of water and/or ponding; high surface runoff under normal or light rainfall; poor root system development, or rootless corn; and even nutrient deficiency.