My blog this week will be more of a pep talk as there are so many things happening that deserve recognition. National Ag Day falls on March 18, so this week presents us with an opportunity to shine the spotlight on agriculture. 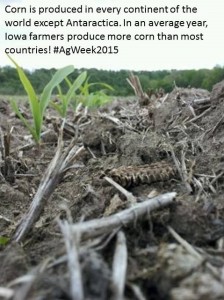 Agriculture’s contributions to the U.S. economy, as well as the roles food and fiber play in security, were highlighted March 7 during the inaugural Iowa Ag Summit in Des Moines. Bruce Rastetter, a fellow Iowa Falls resident, brought together major forces in today’s politics. I first met Bruce about 30 years inside a pig barn. (Imagine that!) He was busy treating sick pigs and doing chores, while I was doing some repair work to his barns.

Over the years, Bruce has gotten very involved in politics. He wanted to make sure issues that are important to him and other farmers are being considered by presidential candidates. He hosted a forum to find out where political leaders stand on important ag issues like nutrition labeling, biotechnology and trade restrictions.

And what a forum it was! Nearly 900 people and about 200 reporters attended the Iowa Ag Summit. I sat in the second row where I could see and hear how these movers and shakers actually felt about the issues. Even though only one Democrat showed up, there were stark contrasts between candidates. This election will be interesting, and it will affect the course of this country. Pay attention and vote!

Last Wednesday I spent the day in Des Moines with a group of other farmers from across the state. First I visited with my state representative and Iowa House Majority Leader Linda Upmeyer. Then I had a much shorter talk with my Senator Amanda Regan because she was on her way to a committee meeting. Our elected officials are very accessible, and they want to your input! If you can’t visit the Statehouse, you can contact elected officials. Call, email or write a letter. It’s our government, so let’s run it!

SIDE NOTE: Two gentlemen who accompanied me had never seen the Law Library in the state capitol. As one of the top most beautiful libraries in the world, a visit to that library is the worth the trip by itself!

On Wednesday afternoon, I and eight other farmers toured the Des Moines Waterworks (DMWW). I noticed the security guard was packing heat, which made me think about how critical – and vulnerable – this facility is because it provides water for a half million people.

Des Moines Waterworks is fascinating! The complex is huge. There are storage tanks of every shape and size both underground and inside buildings. I had no idea there were so many ways to filter and treat water! There are many laboratories and scientists. The really amazing part of this tour for an old farmer like me was a 5,500 horsepower generator and huge water pumps. Big boys like big toys!

It was all impressive, but the highlight for me was seeing a sample of water – the size of a pin point – under a microscope. I watched a microscopic animal, with twin wheels spinning on its head, suck in all the bad stuff from the water! There good living things in your water and there are some not so good. Think about that next time you take a drink!

All of the DMWW employees with whom we had contact were very friendly. They knew we were farmers, and they willing explained how, why, and what they do. We “listened” and we tried to understand. We were told there are 8 tanks for removing nitrates, but DMWW has never had to run all eight tanks. There was a seven-year period when this system didn’t run at all.

This winter 3 to 4 of these nitrate removal tanks ran at a cost of approximately $1,000 per day per tank. If you divide that by 500,000 people served by DMWW, the cost is about $3 per customer. Contrast that to the approximate $13,000 it will cost each Iowa farmer to meet the nutrient reduction goal!

“… We are seeing unprecedented investment,” says Iowa Secretary of Agriculture Bill Northey. “Certainly we’ve got a long road ahead of us and a lot of work to do, but we are really seeing a lot of progress and momentum all over the state.”

So why won’t Waterworks leaders learn about farmers’ efforts? Instead of becoming part a collaborative effort, the DMWW is suing several county drainage districts for allegedly polluting Des Moines’ supply of water.

To solve any problem, there must be some understanding and some sharing of information. A Northwest Iowa farmer tried to foster better understanding by inviting DMWW leaders to tour his farms. However, Des Moines water leaders declined the farmer’s invitation.

As disappointing as the DMWW’s recent actions are, farmers will continue to improve. Farmer awareness of the Iowa Nutrient Reduction Strategy nearly doubled in the past year. Now farmers need technical assistance and resources to transform this awareness into action, says Roger Wolf, director of Environmental Programs and Services (EPS) for the Iowa Soybean Association.

New technology and farmer ingenuity continues to improve our operations, but we must tell the public what we’re doing to get better! Farmers love to farm, but there is another chore we must do daily –and that’s share what we do! National Agriculture Week is a great time to show American how and why agriculture is sustainable for future generations.

Tell your story. Write letters to the editor. Use social media. Share pictures of your soil conservation practices. Not only will this inform non-farmers, but it can give other farmers ideas as to what might work on their farm.