5 Things a Bachelorette Should Know before Saying “I Do”

Talk at the water coolers and comments on Facebook have been heavily focused on ABC’s “The Bachelor” since last Monday’s premiere. Even if you’re not a fan of this reality show, chances are you know the 19th edition features Iowa farmer and Iowa State University alumnus, Chris Soules.

In a recent interview with the ISU alumni magazine, Iowa’s most recognizable bachelor answers five questions. Soules’ notoriety certainly provides him with a worldwide stage to advocate for agriculture, and he hopes people understand that most modern farms are still run as family businesses. In fact, 98% of all U.S. farms are family owned. Soules says, “The people who run those family businesses are not just farmers, they are also business people who have a lot of pride in what they do.”

There is something to be said for the person who not only puts food on the table for his own family but feeds 155 people worldwide! One way Americans can gain a better understanding of the hard work and dedication it takes to be a successful farmer is to get a real look inside Soules’ life. Will Hollywood producers accurately portray our great state or its “bread and butter” industry? 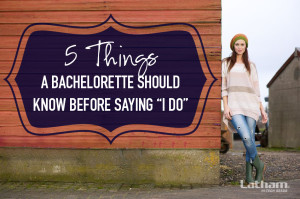 From what I saw during last Monday’s premiere, misperceptions abound. That’s why I put together this list of things I believe all the bachelorettes should learn about Iowa agriculture and life in our state:

The girls whom Chris is getting to know in California don’t appear to have been “picked fresh off the farm,” but that’s not to say that one of them can’t or won’t play an important role on his Northeast Iowa farm someday. Hopefully, this season of The Bachelor will open these girls’ eyes and allow all of America to enjoy a real look at agriculture in Iowa. Like Chris stated in his interview for the ISU Alumni Association’s magazine, VISIONS, we’d love for viewers to see how important Iowa agriculture it is to our state, our country and our world food supply.

P.S. Watch for Part 2 of this series to post one week from today on Monday, January 19!