“Learning by Doing” Translates into Teens Managing Their Own Acres 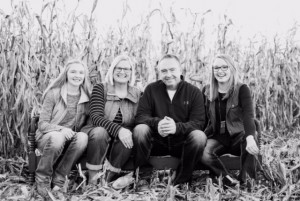 Some parents supervise their children as they do homework. Others even help their teenagers work through Math story problems. When your parents are lifelong farmers and your mother also is a school teacher, chances are you’ll learn how the classroom applies to agriculture.

Meet the Bell family of Washington, Iowa. Kerri moved to Washington County nearly 30 years ago and shortly thereafter she accepted a teaching job nearby. She and her husband, Lance, are raising their twin teenage daughters on the farm.

“I teach. Lance farms. We each have our passions, but our operation is a family effort where we enjoy making memories together,” says Kerri, who grew up raising and showing Suffolk sheep on the Krafka family farm near Dysart, Iowa. “I wouldn’t have it any other way. If you love what you do, it doesn’t seem like work but instead it’s a way of life.”

The 4-H slogan is “learning by doing,” and that’s also Kerri’s mantra. She and Lance put that slogan into practice by providing every day, real-life experiences for their daughters. Ellie and Sophie have raised and shown Polish and Champagne D’Argent rabbits through Bell Sisters Rabbitry since 2011.

In fact, rabbits were the girls’ first livestock project. Ellie and Sophie wanted to learn and grow independently of what their parents had done when they were in 4-H. The girls researched breeds and met with other rabbit breeders across the state to get started. They like these two breed because Polish show in four class divisions and Champagne D’Argents show in six divisions. Now the girls are researching cattle breeds to further diversify their farming operation and to make use of pasture the family has available.

Transitioning from breeding show rabbits to producing beef cattle is one example of how Ellie and Sophie have accepted more responsibility with age.

“From the time our twin daughters were born, they were riding on a tractor or in the combine,” says Kerri. “They’ve helped as much as they could at the age and stage they were.” 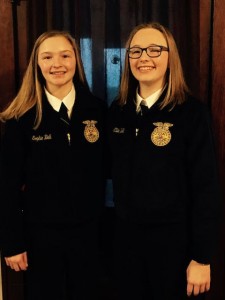 To compensate them for their work, Lance and Kerri started giving an acre of corn and soybeans to each of their daughters when they were in third grade. Ellie and Sophie have had to market their grain in at least a half-acre increment and then deposit that amount into their savings accounts each crop season.

“The girls each got a smartphone in third grade. Their first app was Kat’s Grain, so they could watch the markets daily. Lance receives text messages to ‘sell now’ as the girls watch closely to get the best market price.  Giving them these real-life experiences helps them for the next steps.”

You name it, and Kerri says her daughters have probably experienced it on the farm. Ellie and Sophie have learned to do field work ahead of the planter, run tillage equipment after planting, fill the planter, run water tanks here and there, fill fertilizer tanks, gather seed, repair equipment, trouble shoot, mow, help burn CRP, clean bins, haul and unload grain, and more.

These farming experiences are shared by three generations of family. Lance began farming full time with his parents, Pete and Carol Bell, after he completed the Iowa State University Farm Operations Program. Their roles have changed with time. Today Lance manages the farming operation and Pete assists where needed.

Pete and Carol also are providing farming and learning experiences for their granddaughters by them the opportunity to crop share. (Click here to watch a video of the Bell twins harvesting their first crop share.) Ellie and Sophie have met with their family’s crop insurance agent to complete their crop insurance for their crops. They talk with seed dealers and order their own seed. They choose their own fertilizer, chemicals and insecticides.  They already had a working relationship with our grain marketing firm, so they can call and make decisions based on their prior knowledge and gain expert advice as needed.

“Competing in statewide competitions, completing programs, filling out applications and attending functions across the state gave me many opportunities that I wouldn’t have experienced otherwise,” says Kerri. “My twin daughters have stepped into this same role and are loving it, too. Their FFA Advisor, Mr. Trent Steinhart, sees their passion for FFA and agriculture. His wisdom and inspiration has allowed them to expand their vision of where they hope to be after high school and college.”

Ellie and Sophie were the first girls to take an interest in the FFA Land Lab where they each had to invest $1,000 along with eight fellow FFA members. They do exactly what they do in their crop share experience with their grandparents to better understand the process of farming.

Last spring Ellie and Sophie received greenhand awards. Together they were their chapter’s top fruit saleswomen as freshmen.  Sophie was elected Washington FFA reporter and Ellie was elected FFA historian. Both teens are serving as South East District FFA Ambassadors. They manage the Washington FFA Twitter(@washffa) page and write articles for area media promoting their chapter. They have numerous SAE projects including their rabbitry and crop share.

They Bells also plant a large garden and exhibit their produce at the Washington County Fair. Ellie and Sophie each enter an abundance of 4-H projects at the county fair, and many of these projects have been selected for the Iowa State Fair 4-H Exhibits Building. The Bell sisters’ project areas include: Home Improvement, Food and Nutrition, Crop Production, Sewing, Communications, Personal Development, Woodworking, Photography, Health, Consumer Management, Citizenship, Leadership, Gardening, Horticulture, Child Development, Mechanics, Pride of Iowa, as well as educational presentations and working exhibits. They also serve as Clover Kids mentors. In addition, both Ellie and Sophie have earned variety of county project awards, including outstanding record book, outstanding junior and intermediate awards, and intermediate citizenship awards. 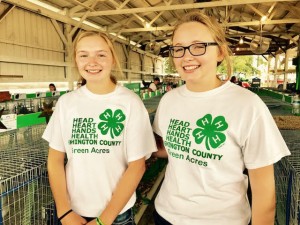 While the iGeneration often make headlines for using “individualized technology,” the Bell family uses technology to make decisions together on their family farm. Ellie and Sophie are proof positive that the “texting and multi-tasking generation” still engages with others and remains involved with the community. They’re following their parents’ examples.

As lifelong farmers, Lance and Kerri became active in the Washington County Corn Growers Association when they were first married. They put a lot of effort into promoting this organization and have served in every capacity in the county organization. Lance is president of the Washington County Corn Growers and serves as president of the District 9 Iowa Corn Growers Association. He serves on a state committee, as well.

“Our family is passionate about sharing our farm story,” says Kerri. On November 29, 2017, they created a booth and helped host the BioFuels Educational Trailer at Kirkwood Community College for Washington Center Family STEM Night. Last spring they participated in an ICGA video and produced a flyer/video for the Washington County Corn Growers banquet. They also have represented their county, district and state at the Commodity Classic in once Nashville, twice in San Antonio and are making arrangements for a trip next spring to Anaheim.

“Through these experiences we’ve all grown. Making connections with fellow corn farmers across the county, district, state and nation to make us stronger in our own family operation,” adds Kerri. “These opportunities have given Ellie and Sophie a stronger base of communication skills, knowledge to grow and learn to make your operation better, a better work ethic and pride in sharing your story with those who share the same passions as you.”

“We are optimistic of what our future in farming holds as both daughters intend to major in agriculture and return home to carry on our farming operation,” adds Kerri. “No matter where they end up, as long as they take pride in their work and enjoy it, we’ll be proud of them.”

The Bell family works hard but also finds time to relax on their farm. Fishing, canoeing and stand up paddle boarding on their farm pond are a few of their favorite pastimes. They also enjoy cheering on the Iowa State Cyclones, DIY projects, gardening and cooking or baking together.

At the 2017 Washington County Fair, Ellie and Sophie were selected as the Grand Champion Team for the Pride of Iowa cooking contest with their Gluten Free Fruit Pizza entry. Their father, Lance, was diagnosed with Celiac Disease nearly 14 years ago. Their family has learned a lot about gluten-free cooking, so it’s only natural these outstanding 4-H’ers would share what they learned with others.

The Pride of Iowa competition is a favorite of Ellie and Sophie’s because they prepare recipes, featuring Iowa foods, in front of an audience. Participating 4-H members then serve their food and share the recipe with audience members. Today their sharing their award-winning recipe with us on The Field Position!

Spread onto parchment lined pan.  Preheat oven to 375 degrees Fahrenheit.  Bake in oven for 12 minutes.  Will continue to cook after removal from oven.

Mix together in a bowl. Spread onto pizza crust when cool.  Top with desired fruits.