Mechanization Transforms Everything from Household Chores to Exercise

I was listening to NewsRadio 1040 WHO early one morning last week as talk show hosts Van & Bonnie were broadcasting live from a Des Moines-area mall. Van mentioned how the “mall walkers” were surprised by the station’s early morning activities. My first thought was, “Why would anyone be in the mall that early to walk?

That thought prompted me to consider how physical activity has changed during the last century. We all know that our eating habits have changed throughout the years. We consume far more calories today than we ever have, but these calories come from different foods than those that graced our ancestors’ tables. Many foods today are processed, unlike a generation or two ago when homegrown foods were eaten fresh or canned to last throughout the winter months. 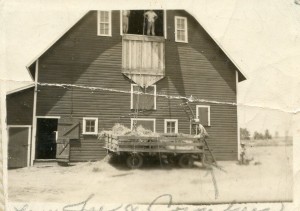 Putting hay in the barn

In the old farm house where I grew up, there was a “potato room” in the basement that was like a root cellar. There also was a “fruit room” where home canned goods were kept. A dumb waiter, or manual elevator, lowered food onto the basement floor where it was keep it cool since there wasn’t any refrigeration at the time this house was built.

Now back to the mall walkers… When I was young, walking was something we did to get to the barn or to a field. Chores on Saturdays involved a pitchfork and a shovel. Three or four times during the summer months, we baled and stacked hay. No wonder farm kids were in pretty good shape for sports! 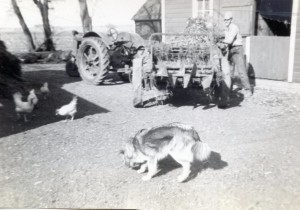 In “the good old days,” cows were milked by hand. Barns were cleaned by hand. Even corn was picked by hand. This has changed to where today many farmers do not even need to steer their tractors across the field! In fact, 41% of the U.S. workforce in in 1900 was needed to grow food. As of 2000, only 1.9% of Americans farmed.

It stands to reason that just as farm chores transformed in the 20th Century, off-farm jobs also have become more mechanized during the past 100 years. A pallet of seed that I plant is now stacked neatly by a robot. Much of the welding in a factory is done by robots. I toured a factory where my hog feeders were built, and the steel is cut and placed by robots! 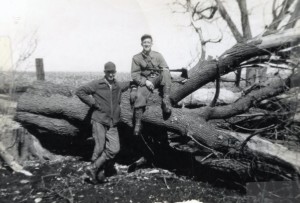 Chopping down a tree with an axe

Even households chores are different today. Central vacuums have eliminated the need to pull around a big vacuum, and coming on strong is the Roomba… you guessed it, a robot vacuum!

Entertainment has changed through the years, as well. When I was young – after chores, of course – neighborhood kids would get together to play football or basketball. I either rode my bicycle or my horse to get to the neighbors. Going outside to play was the most entertaining “option” as we only had three TV channels, and cartoons only aired on Saturday mornings. Video games were nonexistent.

The mechanization of American has created a new industry. Instead of “working off” calories, today we must “work out” to stay fit. Don’t get me wrong – I admire those early morning walkers in the shopping mall. But I can only imagine 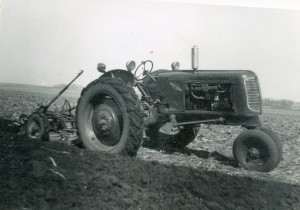 “The most peaceful thing in the world is plowing a field. Chances are you’ll do your best thinking that way.” – Harry S. Truman

Since I practice minimum tillageand no longer plow, I do my best thinking early in the morning while listening to the radio. Thanks for allowing me to share my thoughts with you today!