Note Effects of Frost and Plan Accordingly for Harvest

Weather is always a concern for farmers – and rightly so. Weather accounts for 70 bushels per acre, or 27 percent, of total yield! In research conducted by Dr. Fred Below, Professor of Plant Physiology at the University of Illinois, weather ranks as the most important factor affecting corn yield.

Corn and soybean crops across Latham Country were affected by a mid-September frost. Effects of the frost appear to be highly variable based on local climate conditions, crop maturity, and topographical features. 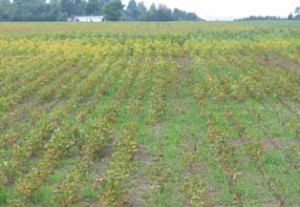 If you haven’t yet already done so, now is the time to scout crops affected by frost and prioritize fields for harvest. The amount of damage to corn from a frost or killing freeze depends largely upon two factors: (1) How cold it gets and for how many hours; and (2) The plant’s stage of development.

When grain filling is stopped by frost/freeze damage, the grain itself is often impacted. Test weights are often impacted, and kernels tend to be softer and more susceptible to mechanical and drying damage.  Misshapen and broken kernels impact air movement through dryers and storage bins, increasing the potential for losses at those stages as well.

When accessing frost damage in soybeans, watch for these characteristics:

Take note of crop damage and prioritize fields accordingly. Focus first on fields that are exhibiting lodging or are at the greatest risk of lodging. Rank and then harvest the fields where stalk lodging or stalk rot is the worst. Hybrid maturity and crop residue management should take a backseat to weak stalks.

Stalk quality problems often are not apparent until mid- to late September in years where crop development is delayed. Monitor corn fields for compromised stalk strength or the development of severe stalk rots, and adjust your harvest schedules accordingly. Harvest these fields early in the season to avoid the consequences of severe stalk lodging.

Prioritizing corn fields for harvest is always important. This year it may be even more so as there were so many variables affecting crop growth and development from planting through harvest. There are some areas that received enough rainfall, so the crop is growing fairly evenly across the field.

In a wet spring like we experienced, roots – or lack thereof – can be a real issue. Stalks could be weaker and the plants may be smaller in very wet or ponded areas of fields. Wet soils are more of a significant factor with bad roots or root lodging, and that would affect harvest decisions.