To Appreciate Farming Today, You Must Know History 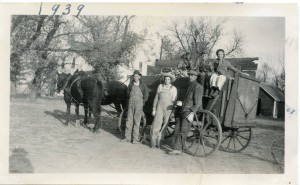 It took an entire family to bring in a load of corn back in 1939. Janice’s grandpa, Fred, is leaning against wheel. Her father is pictured next to him. Just imagine the manual labor involved!

Have you ever wondered what farming and our food system would look like if we farmed the way we did in “the good old days“? I found myself thinking about this topic as I had lots of windshield time to reflect while driving to the 7 meetings I attended last week. (So much for winter being the farmers’ meeting season!)

Many folks believe farming was simpler before technology… but which technology? Technology has a different definition, depending on a person’s occupation or personal experience. Some might define the “good old days” as the time before we planted genetically modified crops. Others might define it before the advent of equipment like GPS and tractors with tracks instead of tires. 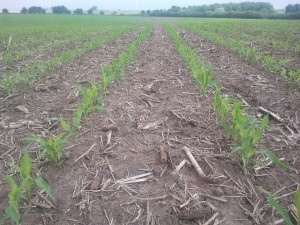 Yet today’s equipment allows us to better manage our land, reduce soil compaction and implement practices like minimum tillage. Today’s farming advances, such as herbicide application and genetically modified seeds, are the most talked about today. But why? What people do not understand, they often fear. Those oppose new technology capitalize on “fear of the unknown.” Fear is used to discredit new technology.

To understand agriculture today, we must know where it has evolved from. In 1790, 93% of the population of the United States was rural, most of them farmers. By 1990, barely 2% of our population farmed.

“The agriculture we have today in the United States is unique,” writes J. Paul Lilly, Associate Professor Emeritus, Department of Soil Science, North Carolina State University. “No nation has ever had so few people actively farming. This is a profound social change that has isolated most people from rural life and from an appreciation of the complexities and uncertainties of food production.”

As a young farm boy, I remember the many different types of crops and livestock we raised that provided food for our own family. We had dairy cows, beef cattle, hogs and chickens. I’ll never forget that goose that chased me and bit me in the belly or the sheep buck that nailed me in the rear as I carried two, 5-gallon pails of feed!

I remember farrowing pigs under flat racks in the pasture. (I could have been a track star because I had plenty of “training” as I ran to jump on the hay rack before a sow, protecting her baby pigs, could catch me!) I trekked several miles, walking soybean through fields and pulling weeds before the advent of Roundup Ready Soybeans. I learned to drive the “70” John Deere on the hay baler when I was six!

I could go on and on about “the good old days,” but I think you get the picture. Farming was a lot of hard, manual work back then. I’m still not sure how or why I survived, except maybe I was still needed to write this blog! I’m not saying that farming is not hard work today, but it’s a different type of work. We farm in a way that is safer and smarter. We also know a lot more about the need to fertilize (feed) plants, as well as protect the water and soil.

In the “good old days,” we plowed the fields until they were black. Farmers took pride in the fact that you couldn’t see a corn stalk when they had finished field work. Why was this a source of pride? The herbicides available then didn’t work if they were diluted by organic matter, or corn stalks. The equipment used then to make a seedbed plugged if the corn stalks were not completely buried. Planters at that time couldn’t plant uniformly if there were stalks, dirt clods or if the ground was uneven. We plowed, disked and field cultivated until that ground was powder.

This was back before we had terraces, buffer strips, or practiced contour farming. As a result, it was common to see road ditches full of black soil and streams full of silt. With black tillage, there wasn’t much room for wildlife to hide. I remember only seeing a deer one time as a young boy. That’s not the case today as wildlife has made a huge comeback. Every time I drive home after dark now, I’m watching for the next deer on the road. It’s not uncommon to see eagles soaring either.

The chemicals we use today are so much more environment friendly, too. When I started farming, it was a problem getting rid of all the pails the chemicals came in because we measured chemicals in gallons. Now we measure in ounces!

Minimum tillage and no till, made possible by new technology including Roundup Ready corn and soybeans, have made this comeback possible. New seed genetics allow crops to withstand conditions that the crops of my youth wouldn’t survive. They have better stalks and better roots. Today’s crops can withstand dry weather, insects, disease and just plain yield better.

When I think of all the new technology being developed today (drones, GPS, crop genetics), I’m even more confused about how to define “good old days.” Perhaps the best answer is the original garden… but even then, there was that darned old apple tree!