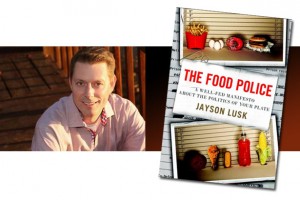 “The Food Police: A Well-Fed Manifesto About the Politics of Your Plate” by Jayson Lusk

In this past Monday’s post, we introduced you to author and economist Jayson Lusk.  Jayson is a food and agricultural economist and author, was in Iowa to speak to an invited crowd at Iowa State University this past week. Latham was among the sponsors of Lusk’s Iowa State appearance.

Lusk’s book “The Food Police: A Well-Fed Manifesto About the Politics of Your Plate” debunks many criticisms of modern agriculture — from claims of environmental plunder and cruelty to animals to recklessly using GMO crops and creating a “toxic food environment” — and warns against the rise of what he calls the “food police” and “food elite” who seek to use government power to damage consumers’ freedom of food choice and farmers’ freedom to operate.

Here is Part 2 of our recap of Jayson’s speech on how to counter criticisms of conventional agriculture:

Even though some of conventional agriculture’s harshest critics seem to be the least reasonable and open to discussion, Lusk urged farmers and ag advocates to not shy away from entering the arena.

“You are being talked about. You might as well be part of the conversation. I know that is hard because you have a full-time job you don’t have time to do this kind of stuff,” said Lusk. “And it’s also a little uncomfortable. As someone who has written a book (defending modern agriculture), I get a lot of hate email, and I would be more comfortable if I didn’t get that hate email.”

The key is to remember that authors of books that denigrate modern agriculture are a tiny minority, and that most consumers (and voters) are open to hearing what farmers have to say for themselves.

Among the tactics Lusk suggested was offering to speak to school classes from elementary through college, reaching out to those who blog about home and family issues and using social media to put out positive messages. He praised efforts like the Iowa Soybean Association’s “Iowa Food and Family Project” which connects farm and non-farm families to create better understanding of the truth of American agriculture.

During the past 10 years, Lusk has published more than 100 articles in peer-reviewed journals on topics related to consumer behavior, as well as food marketing and policy. Learn more about Jayson Lusk at his website, JaysonLusk.com. Lusk’s appearance at Iowa State was sponsored by Latham Hi-Tech Seeds, the Iowa Soybean Association, Farm Credit Services of America, Nationwide Insurance Agribusiness and the Iowa Poultry Association.