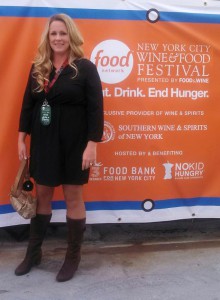 Cristen Clark (aka @FoodSwineIowa on Twitter) describes herself as “a born and raised Iowa farm girl with a passion for baking timeless recipes and sharing my love of the kitchen with others. Memories made in the kitchen are some of the most vivid of mine and certainly the most treasured. I am an avid contest cook and baker but most importantly a stay-at-home mom with two children.”

What I love about this description is how modest she is! During the 2013 Iowa State Fair alone, Cristen won the Nostalgic Comfort Food competition and placed First Overall in the King Arthur Yeast Rolls competition. Cristen also won the Sweepstakes honors for most first place entries; she placed first in 5 individual classes of yeast rolls alone! Her most coveted win during last year’s fair, however, was the Kenmore Honored Harvest Time Recipe Contest.

To celebrate its 100th anniversary, Kenmore conducted a year-long, nation-wide search for recipes that have stood the test of time. Each contestant was asked to provide a history of the recipe and explain its significance to the cook. Cristen created her own recipe for Sweet Corn Ravioli with Sautéed Summer Vegetables and Roasted Vegetable Coulis.

“Growing up and still working on the family farm, I have many food and harvest time memories. My uncle artfully and meticulously maintains our massive family garden and every vegetable in this dish came from it,” wrote Cristen in her contest entry. “This recipe combines the childhood memories of making pasta with my Grandma Madeline, the appreciation of ingredients that are carefully grown and a desire to use them in a thoughtful, simplistic way.

My favorite times in the kitchen with my grandma were making fresh pasta. I loved to watch her make the dough and help her crank the manual machine. She has the hands of a frontier woman, and the humbleness of a woman who had struggled through The Great Depression. It made me see cooking and baking experiences as so much more fun when shared, that in and above all I will write today is the most important thing.

With memories like these, combined with a unique and creative use of fresh vegetables, it’s no wonder Cristen took home first place honors in Kenmore’s cooking contest! She also took home a Kenmore kitchen makeover and earned trip to New York City where last October she joined some of the nation’s top chefs to serve up her award-winning dish at the Food Network New York City Wine & Food Festival.

Last November, Cristen began offering cooking and baking classes from her kitchen in rural Runnells for a “homestyle approach to baking school.” 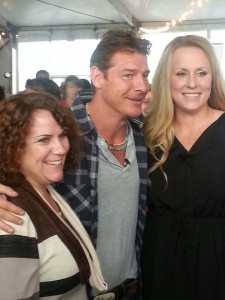 This mother of an active 5-year-old daughter and a 2-year-old son also helps her father raise row crops, as well as works with family members to raise pork and cattle. To learn more about pig chores and animal antics, follow Cristen’s Food and Swine blog. She said she started blogging in November 2013 primarily for three reasons: (1) to create an online scrapbook of family memories and farm history for her children; (2) to “force” herself to actually write down the recipes she creates; and (3) and of course, to help provide understanding between farmers and consumers.

One of the recipes she recently shared is for Sour Apple Pork Burgers, which was selected as a semifinalist in Sutter Home Family Vineyard’s “Build A Better Burger” recipe contest just two weeks ago. Last Sunday her Merlot Candied Bacon Sliders were grilled for guests at Winefest Des Moines “Iowa Lawn Party” as part of the Winefest & Beef Slider Challenge.

Why Merlot Candied Bacon Sliders? Cristen writes, “The recipe I came up with was not without some creativity, mostly due to the parameters that it could only be 5 total ingredients in addition to the beef and the roll it was on. So in essence, 7 total ingredients. The recipe had to be a great reflection of our lovely state of Iowa and fit into a wine-centered event.”

Cristen shares her winning recipe below. Also check out her blog post about the Caesar Sliders, which I plan to make very soon! What’s your favorite way to enjoy sliders?