“Behind the Mic” with an Iowa Hog Farmer

This past seven days was one of those weeks when it was difficult to remember if I was coming or going! The week of World Pork Expo is always busy, but this year several speaking engagements made my schedule even tighter. I didn’t want to say no to any of them because I believe each one had merit. Today I’m sharing diary excerpts to give you an idea of what goes on “behind the scenes,” or perhaps I should say “behind the mic,” at an Iowa hog farm.

Barb & I at National Pork Board

Monday I had the opportunity to meet this year’s class of leaders being trained by the National Pork Board as Barb Determan and I were asked to serve on a media panel. Barb shared tips on how to work with “old school media” by conducting radio and TV interviews. I talked about how communicating has changed in recent years and shared why I believe we must tell our stories through social media. No matter the medium, Barb and I agree that farmers must be honest and open with what we do inside our hog barns!

Tuesday I traveled about an hour away from home to meet in person with a group of Kiwanis. They had invited me to their meeting in Waterloo to talk about how raising pigs has changed over the years. I always enjoy meeting face-to-face with curious and interested individuals.

Wednesday began early with a breakfast in Parkersburg where I shared my message about Operation Main Street (OMS) with the Rotary club. Then my wife, Janice, and I made the nearly two-hour trip to Des Moines for the first day of World Pork Expo. We stood in a long line for a pork burger before watching the pig judging. 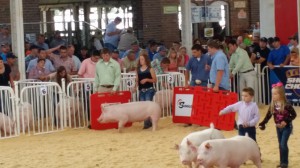 I love the little kids in the right-hand corner! Trent Loos’ daughter is the older girl in the center.

It’s always great to watch the kids circle their pigs in front of the judge, vying for the perfect spot for him to see their pig. There were so many fantastic looking pigs this year! These judges have a tough job! In the hog barns, we ran into the Loos family from Nebraska. Trent’s wife, Kelli, told us the sad story about a tornado hitting their farm while they were in Des Moines. More about that later…

Also on Wednesday, I attended a meeting to learn what’s new with PEDv. Several industry leaders told of what has been learned about this virus, which has killed more than 7 million baby pigs within the last year. Janice and I returned home after a full day of attending meetings and meeting up with old friends.

Thursday I returned to Des Moines and recorded a video for National Pork Board to use when someone calls in with questions about raising pigs. This is just one more way to get the word out about what I do.

That afternoon I attended more OMS training on how to become a better spokesman. It’s amazing what you can learn when you get out of the hog barn! 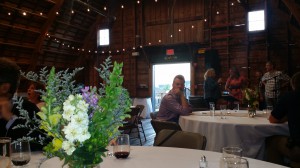 Thursday evening I was invited to a reception for the International Food Information Council, a group of top executives representing large food companies from around the world. Companies like DuPont Pioneer, which sponsored this event, invited a dozen farmers like me. Can you imagine an old hog farmer explaining to a couple of top executives, from big cities, why and how we dock tails and castrate pigs? The old hog farmer wasn’t even me, but I was fascinated as I listened to this conversation. Watching their facial expressions was priceless! (Click here to read a recount from Dan, an Iowa cattle producer who was also in attendance Thursday evening.)

Honestly, we need more events like this. Great information sharing took place. I talked with executives from Coke, McDonalds, Kraft and Nestlé, General Mills and more. They wanted to learn about farming, and I wanted to hear their concerns. I also made some great connections like Tony Flood, senior director for Food Safety & Defense with the International Food Information Council Foundation in Washington, D.C. He wants to continue our talk, and that’s always a good indicator!

Thursday night I stayed with our son Corey and his kids, who live in Pleasant Hill. Fortunately, they live near the fairgrounds because Friday started early! The fairgrounds were eerily empty at 6:30 AM. As I made my way to breakfast, I ran into Doug Fricke. As director of Trade Show Marketing for National Pork Producers Council, Doug is the top person responsible for making this show great. We talked about the weather, of course! The great weather we experienced last week made a great show even better.

Pig farmer Larry Sailer and farm broadcaster Trent Loos sport red shirts to show appreciation for our nation’s troops, carrying on a tradition that started by the women’s Auxiliary to thank troops returning from WWII.

Next I literally crossed paths unexpectedly with Trent Loos! We were the only two people on the street, and he asked if I had 48 minutes. I thought he needed a ride to the airport and said, “Sure.” I always try to make time for friends. Then I learned Trent really needed a guest for his daily Loos Tales radio show, which is 48 minutes long! What an honor to be a part of that show, celebrating the 70th anniversary of D-day.

During this radio program, I learned the extent of damage from the tornado that Kelli mentioned earlier in the week. Their house is still standing but the roof was 100% damaged, so Trent thought he could just live in a grain bin. It’s always interesting talking to Trent because I never know what direction the conversation is going to take!

Even though I literally took a detour on my path to Friday morning’s OMS training, I got there in time to gain a few tips on how to improve my talks with high school VoAg and culinary classes. Then I finished my day WPX by attending a class on social media. Finally, I had to say “enough is enough!”