Volunteering is the Gift that Gives Back

Giving to others, without any expectation of receiving anything in return, can be one of the most satisfying works in life. Even though I volunteer without expecting anything, the rewards have been so great! It’s hard to describe the feelings I’ve experienced while watching a child learn about life by doing a 4-H project or an elderly hospice patient enjoy one last time fishing.

The fact that fewer Americans are willing to give of their time may be leading to larger government. When I think about how much the U.S. government has grown, I wonder what society would be like with less government. Apathy grows as society decides to depend more on government and less on themselves.

Because I care deeply about what happens on my family farm, I began volunteering with farm organizations during the 1980s Farm Crisis. Times were very tough, and change needed to happen! I can tell you from personal experience that our government’s efforts at that time were a dismal failure. Huge amounts of money were thrown at problems, and often times, government involvement just making things worse.

No one understands the problem like the people living it! That’s why it’s so important to get involved at the grassroots level. Through the National Pork Board’s speaker corps, Operation Main Street, I have had the opportunity to present to groups such as the Kiwanis, Lions Clubs, and many civic organizations that I had never before heard of. The definition of a civic organization is “a structure that benefits a community.” It has been eye-opening to learn what civic groups can accomplish! One commonality between these groups, however, is the growing lack of volunteers.

Hospice also is in need of people. I began involved with this organization about five years ago. While it has been the most emotional volunteer work I do, it also has been most fulfilling. 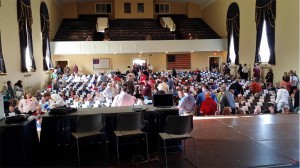 “Government of the people, by the people, for the people” begins by citizens getting involved at the local, country and district levels.

Another area where volunteers are needed is farm organizations. Grassroots efforts lead to better representation. I have done much lobbying and have gotten to know many elected officials. What I can’t understand is why more folks don’t have a voice in “our” government! This process starts on the local level, so I started by attending our caucus in the little town near my farm where I was elected as a delegate to the county and district levels. At the district level, we developed an agenda to help us decide what candidates “fit” with our beliefs. Of course, not every delegate had the same belief system. Developing a platform definitely required compromise, but we worked together and got the job done.

It takes the involvement of many people to make a civilized society work. If like me, you prefer a volunteer society over government control and regulation, then I hope you’ll get involved in the policy making process.