As a young child, I always looked forward to the annual showing of animated classics like “Santa Claus is Comin’ to Town,” “Rudolph the Red-Nosed Reindeer, and “A Charlie Brown Christmas” by Charles M. Schulz. My mom would read “TV Guide” and note when each special would air since “movies on demand” didn’t exist at the time. No wonder these specials were so special!

The Peanuts gang made its debut 55 years ago on Dec. 9, 1965. Schulz had to work hard to convince network executives at CBS, the special’s original network, that they should use actual children to voice the young characters.  He believed the audience would respond to the special’s message about the true meaning of Christmas, and although they were concerned, CBS executives finally agreed and aired it as the creator wanted it. 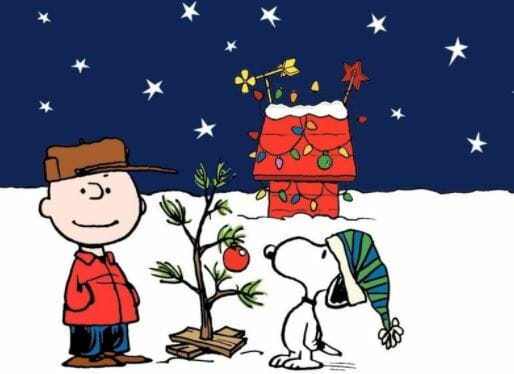 The response to that network debut was even better than anticipated, and through the years, “A Charlie Brown Christmas” has received both Emmy and a Peabody Awards. To commemorate its 50th anniversary in 2020, the network aired the movie only for one night. Click here to learn How to Watch and Stream ‘A Charlie Brown Christmas’ This Holiday Season with your family yet this season.

I love “A Charlie Brown Christmas” so much that I even purchased a Charlie Brown Christmas tree for my son to use as a night light when he was a child. Although she is now a young adult, my daughter still looks forward to decorating her own tree for the holiday season and sleeping as it glows throughout the night. I got the idea for the Christmas tree night lights by reading the “ADVENTure of CHRISTmas” by Lisa Welchel. (Some of you may remember her as Blair on “The Facts of Life.” Oh, how I loved watching that sit com when I was growing up!) This book is filled with many great ideas on how to celebrate true meaning throughout the season.

In honor of the Peanuts Gang’s 55th anniversary, and in celebration of National Brownie Day on December 8, I’m sharing a recipe for Charlie’s Brownie Cupcakes that I got years ago from a lady in my church circle. How fun are personal-sized brownies?

Winter break sounds like the perfect time to bake a batch or two of brownies. Just think of them topped with a small scoop of Blue Bunny® Peppermint Stick Ice Cream and homemade hot fudge sauce…

Cue the “Linus and Lucy” theme song and dance around the kitchen as you bake this season!

Makes 24 cupcakes.
Click here to learn all about the history of brownies.
Photo from Kevin & Amanda