Flat Aggie’s Not in Kansas Any More! 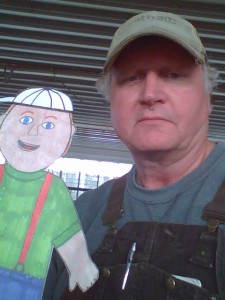 Since farmer selfies (#felfies) are all the rage right now, we couldn’t resist snapping one while we were loading out hogs for market.

Move over, Flat Stanley! There’s a new kid in the country, and he’s been enjoying daily adventures on a North Central Iowa Farm for nearly one month.

Flat Aggie came to me Jan. 13 from a classroom in Southeast Kansas at the request of Nicole Small, who blogs at Tales of a Kansas Farm Mom.  She asked me to show Flat Aggie my farming operation since crops and even livestock operations vary by state. Getting to know other kids from different farming operations and schools around the country is a great experience and learning opportunity. 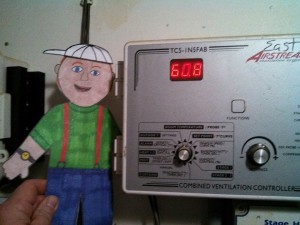 For new pigs, the thermostat inside the barn is set at 80 degrees. Because it was well below zero outside, the barn didn’t warm up to temperature until the pigs were inside. Pigs give off a huge amount of heat and moisture. That’s why we need fans running at all times to exhaust this moisture.

What a great experience for Aggie to learn just what it takes to grow food! Aggie and I have had a lot of fun, but we’ve also had some challenges due inclement weather. We did chores inside a warm hog barn (thermostat is set at 80 degrees), and talked about how much better it felt to be out of the negative 40- degree wind chill that stung our faces as we ran from the truck to the barn. I told Aggie that years ago I did chores outside, and he couldn’t believe we used to raise our pigs outdoors in this harsh weather.

Aggie has visited me at a time when there was so much going on with my operation. During a snowstorm, we loaded big pigs into semi trailers for market. Then we cleaned out the barns, disinfected them and made a few repairs before new small pigs were delivered.

Flat Aggie also learned that winter is the meeting season. He went with me to Des Moines, our capitol city, for the Iowa Pork Congress and to Speaker Corps training at the Iowa Farm Bureau Federation’s office.  Aggie also joined me on visits to several North Central Iowa schools as part of Ag in the Classroom. Along with the school children, Aggie learned about dairy operations and how to make butter. He also learned the difference between comic book animals and real animals. 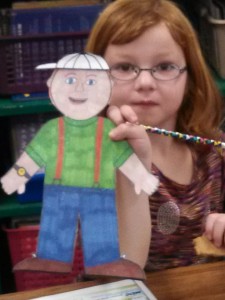 It’s so important for our kids – and I don’t mean just farm kids – to understand how food is raised. Every day the news is filled with examples of how people, who are disconnected from food production, are pushing for the control of the food industry. Just last week PETA distributed a pamphlet entitled, “A Cow’s Life,” at Calabash Elementary school in Woodland Hills, California. The comic book drawing of a cow on the cover was harmless enough, but the illustrations of mutilated cows inside the publication were so horrendous that some outraged parents are considering legal action.

People have the right to know how their food is grown but they deserve the facts, not some propaganda spread by an activist group trying to scare them away from one type of food. Americans are blessed to have an abundance of good, nutritious food available at affordable prices. We all have the right to choose the food we want, but food choices should be based on facts not fear.

The need is great to educate consumers about where their food comes from and how it is produced. I’m seriously concerned about ag illiteracy, a so I’m doing things like hosting Flat Aggie, blogging and speaking when invited. A couple years ago, I spoke at a 140 conference in Des Moines about our Ag in the Classroom program. A young man, who grew up in Chicago, asked why we didn’t have programs like this in Chicago. He claimed to not know where meat came from until he was 18 years old.

It takes a real effort for a busy farmer to leave his/her farm and drive to a school or civic group meeting – or to a 140 conference – where people can listen, ask questions and share experiences. But if we don’t tell agriculture’s story, who will?