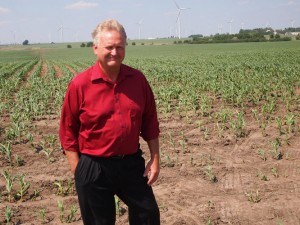 It was the week of Valentine’s Day 2012, but pork producers weren’t feeling the love.  That’s when McDonald’s announced it would begin phasing out suppliers’ use of gestational crates.  Since that time,  more restaurant chains like Cracker Barrel and food suppliers like Oscar Meyer have joined the “ban wagon.”

“I understand the desire for people to return to the bucolic days of farming in the past, where the hogs were raised in the barnyard, but the economics of the business just don’t support that anymore,” said Howard Hill in The Des Moines Register article  published July 7.

Hill, who will become president of the National Pork Producers Council in 2014, continues by saying: “This is the perfect example of the law of unintended consequences.  The effect of the end of gestation crates will drive up prices for pork, and it will drive producers out of business, which will have the effect of consolidating the pork-producing industry further.”

Ironically, gestation stalls were first developed to protect the animals. They were used because sows can be vicious.  Occasionally, they kill one another. Their fights often prevent them from getting the right amount of feed and water.

Does allowing some hogs to overeat while others are underfed sound “humane”?

Crates have actually helped increase the number of live pigs produced by each sow.  Statistics released last week by the U.S. Department of Agriculture show that the state’s hog population is at an all-time high of 20 million although Iowa’s sow population decreased over the last year.  The number of live pigs per breeding animal has been trending upward, and the average sow now produces 10 pigs per litter.

Even though we’re seeing positive results from modern hog production techniques, consumers (or at least those who market to consumers) are telling us to change our way of thinking. Why are pork producers the ones who need to change?  Perhaps we just need to do a better job of telling our story!

Mike Haley, who farms with his wife and his father in Ohio, says there seems to be a lack of outreach to help answer questions about humane husbandry practices.  In a June 23 post on Feedstuffs Foodlink, he writes:

“As HSUS and other activist groups gain momentum and credibility with food distributors and retailers, the pork industry seems to be stuck in a rut communicating the same way it always has hoping to magically end up on solid ground. Don’t get me wrong, there is some good advertising I see about the other white meat.  However, there seems to be a lack of outreach to help answer questions about humane husbandry practices, and the few that exist don’t stack up well with the marketing campaign animal rights groups have perfected.”

Rather than regulating gestation stalls out of use, let the marketplace decide.  Do consumers really feel strongly enough to pay more for their meat?  That’s exactly what happened in England and in California! If some consumers want to purchase “crate-free” products, that’s their prerogative.  Willing consumers can pay more for these specialty products, but I don’t want them to force their values on me.  In my opinion, crate-free pork is no different than free-range chicken or organically grown vegetables.  Label it, price it and let the marketplace decide.  Just don’t legislate it.