Kicking Off the Football Season with Pork

Larry Sailer is known as a hog farmer from North Central Iowa, an agvocate and the author of “Musings of a Pig Farmer.”  Some folks even remember that he wrestled in college.  But did you know that Larry is the proud grandfather of a member of the Iowa State Cyclone football team?

Devin Lemke was a three-star recruit and named to The Des Moines Register Class 2A first-team all-state team.  As a high school senior, Devin caught 10 passes for 199 yards and four touchdowns.  He threw a 55-yard touchdown pass as a tight end on offense.  He also recorded 53 tackles, nine for a loss, earning all-district honors as a junior. 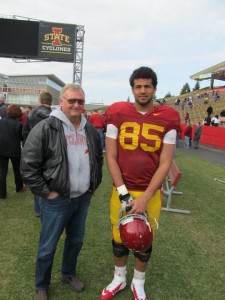 An all-around athlete, Devin lettered four times in track and wrestling.  He was a two-time conference champion and qualified for state wrestling tournament as a junior.  He placed third in state as a senior and was one of three finalists for Mr. Wrestler.  Devin also was member of state champion 4×100-meter relay team and finished third in 200 meter dash at state championships as a junior.

With stats like these, it’s no wonder Devin was being recruited by both Iowa and Iowa State.  An endearment to the Cardinal & Gold, as well as respect for Coach Paul Rhoads and his vision to build the ISU football program, ultimately swayed his decision.  When Devin announced his commitment to Iowa State, he was quoted in the newspaper as saying, “It means a lot to know that I’ll be representing my home state.  My family is proud of me, and my decision to pick Iowa State really made them happy.” 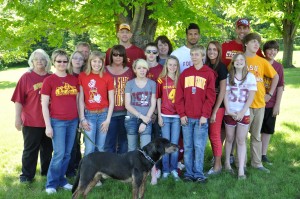 “We’re proud of all Devin has accomplished on the field and in the classroom,” says Larry.  “But most importantly, he’s just a great kid! He takes sports seriously, but win or lose, he acts with class.  He’s earned respect from his opponents and coaches alike.”

“Devin is a hard worker whenever there’s a job to do,” adds Larry.  “He’s dependable and he doesn’t quite until the job is done. He has helped us on the farm for many years and still comes home to help every chance he gets.  He literally gave me a helping hand when I was laid up and couldn’t do my hog chores this past winter.  He comes home often and helps wash out the hog barns.  He helps during the planting and harvest seasons, too.  He’s a real worker.”

This weekend that Iowa work ethic will get put to use on the gridiron.  Larry and his wife, Janice, along with Devin’s parents, Charlotte and Lance Lemke, will be among the happiest fans in the stands.  Not only does Saturday’s game against the UNI Panthers mark the Cyclones’ 2013 season opener, but it’s also Devin’s return to the game as a shoulder injury keep him on the sidelines last season.

How does a family celebrate such an occasion?  The Sailer family celebrates with pork, of course!  Charlotte has requested that Larry smoke a pork loin, which is a family favorite.  But a tailgate just wouldn’t be complete without a few side dishes and snacks.  That’s why today Janice is sharing her simple recipe for Mexican Dip.  Mix together a batch and get ready for a Cyclone weather alert!

Put in slow cooker until cheese melts. Stir and serve hot on crackers or tortilla chips.