Val Wagner and her husband, Mark, at the North Dakota Stockman’s Convention on Dec. 26, 2013.

As a young girl growing up in rural North Dakota, Val Wagner dreamed of becoming a big-shot lawyer and living in a metropolis.  Then she met a farmer (aka “Boss Man” on her Wag’n Tales blog) at the county fair, and well, her dreams changed.

Val and her husband, Mark, make their home in very rural southeast North Dakota on the land that has been in her husband’s family for more than 50 years.  Together, they’re caring for the land and livestock, raising their four sons and ensuring that farming will be their legacy. 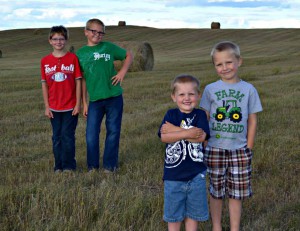 Helping ensure a farming legacy for their four sons is why Val Wagner started her Wag’n Tales blog. “One of the things I enjoy most about living on our farm is being able to show my boys nature first-hand,” she says. “They learn about life, have the chance to create their own theories and dream of the future.”

“These four boys are the reasons I do what I do,” says Val, while addressing a group of seed company executives Thursday during the 25th anniversary of the Independent Professional Seed Association (IPSA).  “Their opportunity to farm this land isn’t going to be lost on my watch.”

Val saw how times were changing. Ag literacy is a real concern, so she started Wag’n Tales to help create a better understanding of modern agriculture.  Her blog has allowed her to virtually “open the farm to everyone.”  She believes the most important things she does is answer questions that non-farmers have like: What are cows fed? How are cattle taken care of during the winter? What is it like when a calf is born?

“I usually don’t travel an hour past my farm yet my blog has been read around the world,” says Val.  Readers live in all 50 states plus 163 countries.  She literally has a world-wide platform to discuss topics ranging from “the Science behind Crop Technology” to “School Lunch Rules” and “Corporate Farming.”  Her tongue-and-cheek blog post about “How to Spend 10 Years Married to a Farmer” went viral with more than 10,000 hits on Facebook.

“I have a story to tell, and my story is unique to me,” she says.  “But like my fellow North Dakota prairie farm wife Jenny Dewey Rohrich says, ‘Your story may seem ordinary to you, but it’s extraordinary to someone else’.  The same is true for everyone else. Tell your story and become an advocate for agriculture!“

Recipes are another way Val connects with non-farm moms and others on her blog.  In honor of January Soup Month and as a tribute to the German-Russian Country in which her family resides, today she’s sharing a recipe for Knephla Soup.