Harvesting Faith during the California Drought 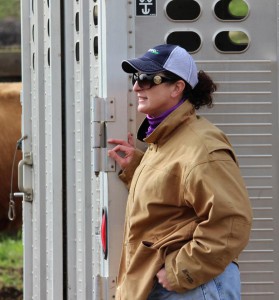 “I love dressing up and painting my nails, but when need be, I can wrestle a calf or fix fence.” — Celeste Settrini, 4th generation rancher from Salinas, Calif.

California experienced its driest year on record in 2013. The New Year brought hope of much needed moisture, but those hopes have diminished with each passing day.

“In 135 years of record-keeping, this has been the driest,” said climatologist Bill Patzert of NASA’s Jet Propulsion Laboratory in a January 27 VOA report. “Since July 1, we’ve had less than an inch of rain. In January, which is historically our wettest month, we’ve had zero rainfall.”

So what’s a rancher to do when pastures turn brown and water supplies dry up? Celeste Settrini, a fourth generation rancher from Salinas, California, is drawing on the strength of those who have gone before her. Her ancestors moved to southern California 100 years ago, started dairying and then built a commercial Hereford herd. When Celeste’s father took over the family ranch, he switched to Red Angus beef. 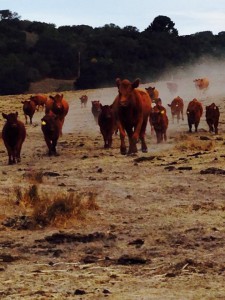 “We’ve spent years building our herd and investing in genetics,” says Celeste, who lives in the same house her grandfather called home. Her father passed away suddenly last June, so now she and her brother manage the cow herd while their mother does the books.  “Ranching is our legacy, and we’re committed to it.”

In an interview January 28 with Trent Loos on Rural Route Radio, Celeste described the dire situation facing farmers and ranchers in the west.

“… I was throwing hay off the back of our truck and saw our cows coming over the hill,” she says.  “It was so warm out, and there was so much dust following them. I just sat there and cried because I’m so anxious and so worried about this drought we’re going through.”

That day was a turning point for Celeste.  She realized it was time to do something. With encouragement from a friend, Celeste decided to share her faith and invite others to ask God in unity for help. She created an event called Harvesting Faith – a day of reflection, prayer and fasting and scheduled it for Sunday, February 2.  She asked all of her friends on social media to pull together to support friends in need by praying for rain.

Winter is normally the time that California ranchers rely on the rain to turn the grass green and restock their water supplies.  Without rain, there’s no grass for the cattle.  Many ranchers are purchasing hay, and some fear their production costs will triple.

California ranchers won’t be the only ones feeling the economic impact of this drought, however.  Drought in Southern California could impact world food prices as this area produces 400 different crops.  Volumes of fruits, vegetables and cattle are sold throughout the U.S., as well as exported.

This week I was fortunate enough to get to taste test a few of this region’s specialties firsthand during a trip to southern California.  Celeste introduced me to grilled artichoke in Monterey, and I taste-tested some of state’s freshest extra virgin olive oils and artisan vinegars at the Quail and Olive in Carmel Valley.  Celeste says she LOVES grilled cauliflower (which I’m looking forward to trying soon) and believes chunky blue cheese dip makes fresh vegetables all the more enjoyable.

Because strawberries also are grown on the Settrini Ranch, today Celeste is sharing with us one of her “guilty pleasures.”  She says this strawberry treat is simple but heavenly.  Try her recipe below or click on the links above to add some new flavors to your Super Bowl Party.  If you chose to fast as part of the Harvesting Faith event this Sunday, keep these recipes in mind for another day soon to enjoy some of California’s finest produce.

If you don't want to dip the berries, you can dish this up in a small bowl. Start with some Strawberries, Raspberries & Blueberries, put a dollop of Sour Cream (or plain Greek Yogurt) on top, then sprinkle Brown Sugar over top. 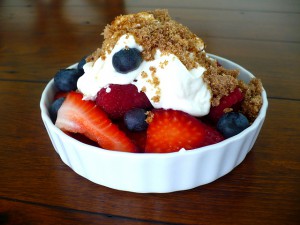