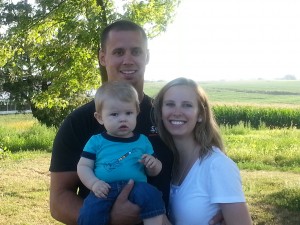 Aaron Wenger is proud to be the fifth generation to live on this century farm just southeast of Elgin, nestled in between the beautiful rolling hills of northeast Iowa. But, he took the most unusual road to get home.

As a child of a career military officer, Aaron spent his childhood moving from place to place.  His two brothers and he moved all over the nation, living in a total of eight different states.  One constant was spending summers in Fayette County, Iowa, where he stayed in his grandmother’s large farmhouse and helped his uncles farm.  Helping with farm work gave him a sense of accomplishment at the end of the day and connected him to the land and the people here.

That’s why, after graduating from Tipton Rosemark Academy in Memphis, Tennesee, Aaron knew he was going to make his way to the Midwest.  He accepted a partial football scholarship at Southeast Missouri State in Cape Girardeau, where he played linebacker.

“I really enjoyed playing football,” says Aaron.  “As an athlete, I liked competing.  I liked challenging myself physically and mentally.”

Aaron loved belonging to the team and the experience of college football, but he felt the urge to look toward the future and decided to transfer to Iowa State University (ISU) in Ames.  Friends and cousins were attending ISU already, so adjusting to a new college was pretty easy for Aaron.

After graduating in December 2008 with a bachelor’s degree in Ag Studies, Aaron worked for a farmer in Central Iowa for two years.  He used this time to build connections in Fayette County and plan a transition to his grandparents’ farm.

Aaron’s uncle was willing to help him begin farming.  Aaron provided labor on his uncle’s farm in exchange for the use of his uncle’s equipment.  An agreement was also reached with his Grandma Wenger to move into her farmhouse, which allowed Aaron and his wife, Kali (Kay-lee) to start making that house their home put putting their own touches inside.

There have been a few changes since Aaron and Kali were married in December 2010.  Aaron’s grandmother now enjoys living in town.  Aaron and Kali are adjusting to parenthood as their son, Broc, will soon be 8 months old.  Also this spring, they decided to build a hog building to diversify their operation and spread out the risk of farming.

It had been 30 years since pork had been produced on the Wenger farm, so it took a great deal of work to get ready for the first group of pigs.  Aaron built a new wean-to-finish barn.  When many Iowa farmers were concentrating on getting spring field work and their crops planted, Aaron was juggling a workload that also included disinfecting buildings before his second group of hogs arrived.

Fortunately, Aaron has the support of his wife.  Kali, a native of Parkersburg, Iowa, grew up on a dairy farm.  Her grandpa started milking and her dad operated the dairy until 1997 when he entered the hog business.

“Raising hogs was a family effort,” says Kali.  “We worked together.  My parents made working fun, and it certainly helped all of us kids develop a strong work ethic.”

After graduating from high school, Kali earned an associate’s degree in child development from Hawkeye Community College in Waterloo.  She then transferred to Upper Iowa University in Des Moines where she completed a bachelor’s degree in early childhood education.  Now she puts her background and experience to work as the preschool director and teacher of the 4- and 5-year olds at Valley of Elgin.

Aaron and Kali are looking forward to raising their children on the farm where they can gain an appreciation of caring for the land, nurturing crops and growing food to help feed the world.  They’re proud to make their home in Elgin, the little Switzerland of Iowa, where the hills are alive with the sounds of bawling calves, snorting pigs and powerful tractors.  It’s where roots run deep and friendships are formed.

It was Aaron’s friendship with corn product specialist / regional sales manager Nick Benson that drew him to Latham Hi-Tech Seeds.  “Nick spoke very highly of Latham’s diverse product offerings and explained how the family-owned, independent company can draw best genetics and traits from the industry.  After seeing my yield results after the first year, and then watching how well Latham® products performed during the drought, I didn’t have any reason to look anywhere else.  I like the idea of supporting a family-owned business.  Plus, Nick takes the time to place products on a field-by-field basis for me.  I couldn’t ask for better service.”

Today the Wengers are sharing a couple of their family favorite recipes.  These ham balls are perfect for fall tailgates, whether they’re enjoyed outside the football stadium or inside a farm field during the harvest season.  These meatballs can be made ahead of time and freeze well.  Mix up a batch for supper, followed by Cherry Crunch for dessert!