Lawsuit Could End Transparency at the Farm Gate

Is farm transparency going to end just as we are starting to roll?  Yesterday Radio Iowa reported the Iowa Senate voted 26 to 21 against providing new legal liability protection for landowners.  This bill was introduced after the Iowa Supreme Court ruled that farm owners who host tours could be held liable for accidents.

Iowa farmers had been protected for more than 40 years under the recreational use and immunity statute.  It stated: “farmers are immune from liability of injuries that occur on their property aside from a farmer willfully injuring an individual.”  That all changed on February 15 when the Iowa Supreme Court ruled that the owners of a Northeast Iowa dairy farm could be sued by a chaperone, who was injured when she fell through a hole in a hayloft during a kindergarten class field trip.

“It is important that farmers reach out to the general public and show them what we are doing on our farms and why.  Iowa agriculture has a tremendous story to tell, and it is important we make it easier for farmers to share what they are doing, not more difficult,” said Iowa Agriculture Secretary Bill Northey in a FarmWorld article posted Feb. 27.  “It will be extremely unfortunate if the Iowa Supreme Court decision discourages farmers from opening up their farms for tours and other educational efforts.”

Secretary Northey said it well.  The Supreme Court ruling, without corresponding state legislation to provide immunity, could cause many farmers to shut their doors.  The Daily Iowan, on April 11, quoted me as follows: “It’s one of my passions to show people who don’t know a lot about a farm what a farm is.” 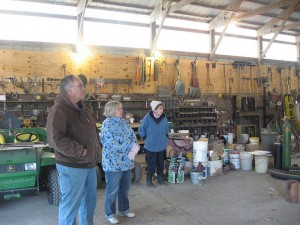 I’ve been very involved with giving people, who are removed from farming, a porthole to view how modern farms operate.  I believe in letting them watch as we go about our business of making food, fuel and fiber!  I was – and still am – under the impression that we must do everything possible to protect visitors to our farms.  Sometimes, however, things happen that are beyond a farmer’s control.

When I think back to the visit to my farm last fall by a group from Japanese Public TV, I believe there also has to be some personal responsibility.  That camera man stood on top of anything he could climb to get the right angle!  He stood on top of tractors, climbed into wagons of corn, and crawled all over my combine.  I could tell him he wasn’t being safe, but he would choose to get the angle.

That same week, Fox News Network, was in my field as we harvested soybeans.  The man with the camera hung on the outside of my combine as my son Corey drove across the field.  Personally, I think these camera guys are nuts!  If something had happened to one of these people, I would’ve been responsible!

I’ve been involved with the Franklin County Bloggers Harvest Tour.  For the past two years, we’ve invited urban bloggers to spend a weekend in rural Franklin County where they tour historic sites and see firsthand how we harvest our crops.  These tours have been highly successful because our guests are very active with their followers on Twitter and Facebook.  They also post blogs to their vast readerships, spreading what they have witnessed far and wide.  They share farming insights with literally thousands of folks across the country, who enjoy learning more about Iowa agriculture.

Consumers, our customers, want to see how their food is raised.  I want them to see how their food is raised, too!  There are too many misunderstandings being spread through the mainstream media and through social media networks.  That’s why there is a need for our harvest blogger tour, on-farm visits and on-farm interviews.  Hopefully, these will be able to continue. I encourage you to contact your elected officials if “transparency at the farm gate” is important to you!