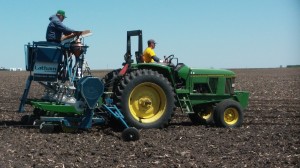 It is only the farmer who faithfully plants seeds in the spring, who reaps a harvest in the autumn. — B C Forbes

Trips to Oregon and Alaska top the “top do” list for Gary Bennett, who retired in December after serving nearly 28 years as a research coordinator for Latham Hi-Tech Seeds.  Then like any other Iowa farmer, he’ll look forward to spring when he can till the soil and plant the 2013 crop.

“I’m not sure how I ever had time to work!” says Gary with his signature easygoing smile.  He’s stayed busy this past month by insulating and paneling the garage, as well as remodeling barn stalls.  He’s getting everything in order for the spring arrival of bucket calves, which his grandkids will break to lead and exhibit at the 2013 Franklin County Fair.  Then they finish out the steers and sell the beef by the quarter.  This tradition started 10 years ago when his first grandchild was old enough to show in the open class. 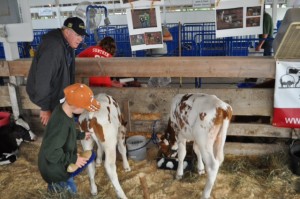 “I really believe it’s important for kids to have responsibility,” says Bennett.  “Raising livestock teaches them every living thing has its purpose.  They learn the importance or completing a task and the feeling of accomplishment when a job is well done.”

Raising livestock is something Gary has enjoyed since he was a child himself.  He grew up on a farm in Howard County where he was a member of both 4-H and the FFA.  He had the honor and pleasure of attending state and national conventions.  During his junior year of high school, he earned the Iowa Farmer degree and was also runner up to the Star Dairy Farmer.  When his kids were old enough to join 4-H, Gary served as their Northwest Franklin club leader. 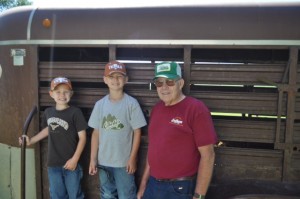 Gary and his wife, Diane, moved to Franklin County in 1975 when he accepted a position as Dairy Herd Improvement Association (DHIA) supervisor.  After working five years for DHIA, milked his own herd of dairy cows for five years before joining Latham Hi-Tech Seeds.

“I really enjoyed my career with the company,” says Gary.  “It was always fun to plant the new varieties and see which ones made the cut.  Technology continued to change and genetics improved – many changes happened over the years.” 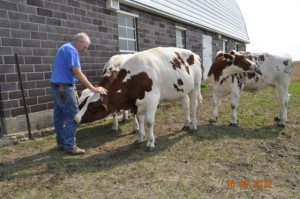 Gary’s also looking forward to doing some landscaping around his farm this spring.  He’ll also enter a few tractor rides with his restored 1953 Super M Farmall.  We wish Gary many enjoyable days relaxing in the great outdoors this spring and summer.

There are still a few winter months that all Midwesterners must endure before we can turn our attention to gardening and farming.  To help get us through a few more weeks of wintry weather, today Diane shares with us a few of the Bennett family’s favorite recipes for soup & cookies.  Enjoy!