Dad, my uncle, and my grandparents farmed together and lived on three homesteads that were spittin’ distance from each other. The combined kid-count for the families eventually reached fourteen, so we could move like a swarm of locusts from house to house–playing in the yards, spilling kool-aid in the kitchens, and tracking in enough mud to start small indoor gardens.

Before we were old enough to chore and drive tractors, the adults tolerated this mayhem. As Mom recalls, “On a snowbound day, you kids could wreck my house in the morning and then move on to Aunt Ruth’s place for a second shift in the afternoon.” With no video games, cartoon networks, or battery-driven toys, we built pillow forts, played hide-n-seek, and concocted games with marbles, plastic army men, and knicked-up Lincoln Logs. When cabin fever reached a certain point, the folks would relent and let us brave the snow and cold. Even in the dead of winter, a Midwest farm in the 60s could be a vibrant playground. 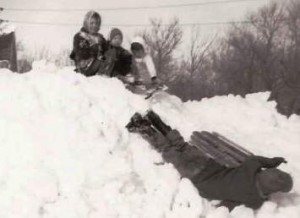 We might start in the yard with snowball fights, snow angel designs, and our own kamikaze version of duck-duck-goose. With Mom’s home-sewn snow suits on, we survived tumbles on the ice and wrestling matches with the dogs, but as we grew a bit older, our boundaries expanded. Red plastic saucer sleds worked well on snow drifts and short inclines, but large runner sleds gave us more speed. We’d take off down the lane, often with brothers or cousins jumping on until a sled might look like a shaky pile of logs with a boy at the bottom groaning in pain until all three or four of the bobsledders crashed in a heap.

The creeks and pastures called us further afield even when they looked like silver arctic zones. The two streams on our farm provided a Jack London setting, and we would walk on the ice looking for muskrat trails and rare beaver dams. As in London’s famous story “To Build a Fire,” one of us would occasionally break through the ice and fill a boot with frigid water. Unlike the story’s main character, we all survived, although I’m sure we entertained the shivering victim on the fast walk home with tales of frozen fingers and amputated toes.

Survival was tougher when we became old enough to skate and play hockey on the creek. We’d make holes in the ice for goals and the pucks were rocks, clods, or maybe a frozen “road apple” from an old cow pie on the bank. Scores were low but wet clothes and near concussions came regularly from our awkward falls and lack of skating ability.

When cold winds started to numb our cheeks, we might seek refuge in one of the barns. Hogs and cattle provided a type of bio-heat that came from warm animal bodies and the steamy straw-manure bedding they lay on. The heat rose into the haymow where we’d make tunnels and play some type of king-on-the-hill turf war. It was a bonus if we found a nest of baby kittens and a bummer if someone crawled through a tunnel that the raccoons had used for a litter box.

A classic winter day on the farm ended with a peel-and-pain routine. We’d peel off wet gloves, four-buckle boots, and ice-laden coveralls and then complain as our fingers and noses burned with the stinging pain of the thawing-out process. We then huddled in front of the furnace vent and got warm with the help of fresh-baked rolls. Mom knew how to cure frostbite. She also knew how to acquire some sanity on snowbound days. In an era long before smartphones, Mom had an app for kid cabin fever: it was an aperture called the front door, and she knew how to download it—you dressed the kids in warm clothing, turned the door handle, and let them access the winter wonderland that came already installed on a Midwest farm.