Busting Myths about CAFO in D.C. 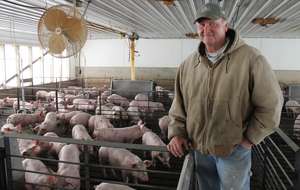 Last week Iowa House Ag Chair Annette Sweeney asked me to meet with her in preparation for meetings she has this week in Washington, D.C.  To our meeting, she brought two coffee table books about Concentrated Animal Feeding Operations (CAFO).  One of these books, simply titled CAFO, has been widely distributed to public officials.  The other book, Welfare Ranching: The Subsidized Destruction of the American West, is a seven-pound book featuring 346 pages of articles and photographs by so-called expert authors and photographers.

One chapter the CAFO book is titled, “Old McDonald Had Diversity.”  This chapter references the “diversified farms” of the 1950s and 1960s – it’s the image people have of farming by reading children’s books and watching movies. Old McDonald’s Farm and Disney productions, however, don’t portray modern farmers.

Unfortunately, people without a direct connection to farming often don’t see just how many improvements have been made.  Most folks only know what they hear and see through the “mainstream media,” which typically doesn’t cover the whole truth.

The truth is I grew up on a diversified farm back in the fifties and sixties.  Farming then wasn’t as “romantic” as some make it out to be.  We raised lots of different animals, most of them outside.  I remember the hardship those animals suffered during harsh Iowa winters, and we farmers worked to keep them from literally freezing to death.  It was a real challenge to keep fresh, unfrozen water and feed for available for them.

Fast forward that 50 to 60 years, and the hogs in my care are warm during the winter and cool during the summer.  The temperatures inside my building do not vary more than five degrees, regardless of the outside temperatures.  My pigs have all the fresh water they can drink and a diet that’s designed to be just what they need for their size.  (Unlike the school lunch program!)  My pigs are very content. When I do chores, they run around and bark.  When I get close to a pen, they come up to greet me.

But, I don’t expect you to take my word for it.  I’ll let you see for yourself!  I’m starting a blog series that will follow a group of pigs from the time I get them, about 50 pounds, to when they are market ready around 290 pounds.  I’lltry to show just what these pigs have for shelter and what it takes for me to take care of them.  I do realize some may think I am doctoring up video to show a good side of farming, but I guess if the animal welfare people can show you what they want you to see, so can I.  The difference is that I’m not sneaking around.  You’re all welcome to come and see for yourself!