Corn as High as an Elephant’s Eye

“Knee high by the Fourth of July” was an expression used for many years by Midwest farmers, indicating their corn crop was expected to yield well if those “knee-high conditions” existed.  These days the lyrics, “The corn is as high as an elephant’s eye,” from the song Oh, What a Beautiful Morning from the 1943 musical Oklahoma! by Rodgers and Hammerstein, is more accurate.

This year you could even describe much of the corn crop as “high as an elephant’s eye and tasseled by the Fourth of July.”  But a walk into Latham’s Genetic Garden will show you just how much corn varieties and hybrids have evolved from the 19th Century until now.

On July 4th we saw corn plants of every size: ankle high, knee high, head high and even some that had tasseled.  Temperate teosinte, one of the first ancestors of corn, is about knee high.  Wild teosinte is measuring around knee high.  Northern flint, a red dent corn is tasseled.  Current hybrids like LH 5494 3000 GT are “as high as an elephant’s eye.”  This truly shows the evolution of hybrids at Latham Hi-Tech Seeds. 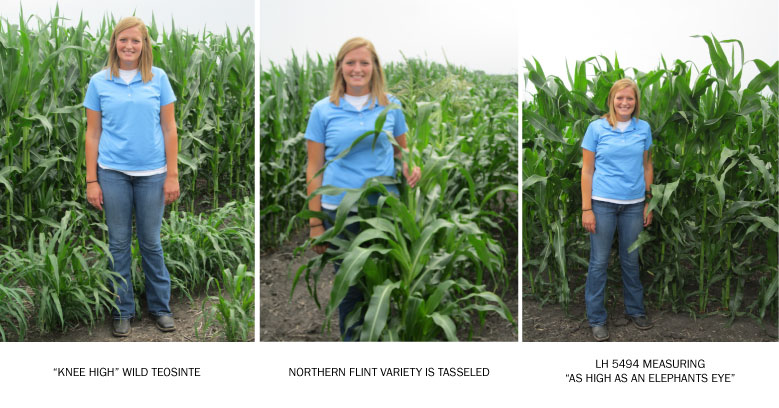 Many of the varieties aren’t equipped to handle the hot, humid and dry weather we have seen.  Because the weather we’ve experienced this growing season is starting to take a toll on the Genetic Garden, we’ve begun to irrigate it.

Look to TheFieldPosition.com for continued updates on the Genetic Garden.  We’d also like to invite you to see it for yourself!  Take a walk through our “living museum of corn” on Saturday, Aug. 25, during the Latham Country Fair in Alexander, Iowa.