Rachel Norby, who will intern this summer with Latham Hi-Tech Seeds, spent Spring Break learning about agriculture in Costa Rica. Get a glimpse of the people she met and the places she visited as you read a daily account of her journey. Click here for Part I of her travels.  Today she shares Part II.

After stopping in a local town to visit a farm supply store, where the main purchase by my fellow students was machetes, we departed Sarapiqui for the La Corsicana Pineapple plantation.  The variety of pineapple that is grown in Costa Rica originates from Hawaii.

Upon arriving at the plantation, we loaded onto a sun-shaded wagon and headed into the fields to see the different stages of production.  We first saw an empty field that had recently been plowed under; this area had very sandy soils which are perfect for growing pineapple.  They use a raised bed system to grow the pineapple and also drainage ditches to carry water away from the plants.  Our next stop was a field where a worker was planting roots and shoots from the previously harvested plants to start a new field. 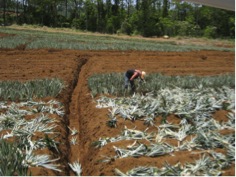 A worker at La Corsicana Pineapple plantation plants the roots and shoots from previous crops.

Our guide picked many fresh pineapples from the field for us to taste and also taught us the correct way to choose a pineapple in the store.  Many people think a ripe pineapple should dent when a fingernail is pushed into the bottom or that it should smell sweet, but all these techniques were proved wrong by an expert in the pineapple industry.

There are three characteristics to look for when choosing a pineapple:

After seeing the fruit in the fields, we were taken to the packing plant where we saw workers wash, sort and box the fruits to be sent all around the world.

In the afternoon, we visited La Tirimbina Reserve where we toured the rain forest and also learned how indigenous people made chocolate from the cocoa plant.

We were supposed to travel north from the La Fortuna to the city of Los Chiles which is near the Nicaraguan border to visit a citrus farm.  Due to heavy rains in the area, we visited a local citrus farm, TicoFrut.  There we met with the farm manager and were able to see the orange trees at the plantation.

Citrus production is an important part of Costa Rican agriculture.  Nearly 20,000 hectares, or 50,000 acres, of orange trees are grown here.

In the afternoon we were able were able to zip-line through the rainforest canopy.  The views into the canopy were amazing.

Today we departed to the Pacific coast and visited the farm of Carlos Rodríguez.  Carlos received his master’s degree in Plant Pathology from Iowa State University.  He has a 180-cow dairy herd and also raises corn, sorghum and soybeans as forage crops.

The soybean plot on Carlos’ farm is one of the only in the entire country.  The variety he is growing was developed under the research of our hosting professor, Dr. Enrique Villalobos.  I wish I would have been able to get a picture of the shocked looks on our faces when Carlos told us the soybeans were maturity group 12!

The Rodríguez farm is located at sea level, on some of the only flat land that we saw.  The climate was starting to get more tropical, and you could tell we were getting closer to the coast.  The humidity felt like the middle of a corn field in July!

We were told the feed rations for the dairy cows was mainly sorghum silage, dried distillers 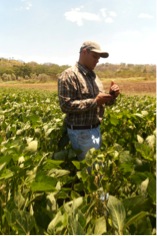 Carlos Rodríguez checks his soybeans, which are in a test plot for the Universidad de Costa Rica.

grains, waste melons, orange peels and pineapple peels.  Since the farm is located near the coast, distillers grains are easier to ship in from the United States.  Carlos pays double what they would cost for us here in Iowa.

As we approached the farm, fields of melons such as cantaloupe and honey dew lined the roads.  Carlos explained that the company needs to get rid of those melons that don’t meet standards for selling.  He’s able to help dispose of them as an energy source in his feed rations.  The orange and pineapple peels also come from processing plants in the area.

Following the tour, we spent the afternoon swimming and relaxing at Jacó Beach.  We also watched a beautiful sunset over the Pacific Ocean.

We followed the coast south to the town of Parrita where we visited CoopeCalifornia, a local palm oil cooperative.  Costa Rica has approximately 60,000 hectares, or 150,000 acres, of oil palms.

Before the trees are planted in the plantation, they start in a green house for one year.  The trees are then transplanted in the fields, and only reach around one meter of growth in the first three years.  These short trees make for easy harvest.  The trees in the plantation are cut and replanted after 20 years of production because they reach heights that make harvesting difficult. 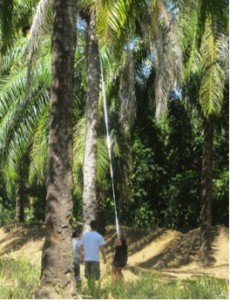 Trying to cut the oil palm bunch down from the tree.

The bunch or fruit that is harvested from the tree weighs about 20 kilograms, or 45 pounds.  The workers at the farm use a tool with an extendable handle that has an extremely sharp blade on the end.  Due to the extreme heat and humidity in the area, they only work in the fields from 6 a.m. until noon.  During this short time they are able to harvest over 100 bunches.  We tried to harvest the oil palm bunches, and I quickly realized how hard it actually is!

After the tour we began our travels back to the San Jose area.  We ended the day close to the airport, so we could be ready for our early morning departure on March 16.  It was bittersweet leaving Costa Rica and returning to Iowa as this was truly a once-in-a-lifetime experience.  Our group had so many opportunities to learn about agriculture in Costa Rica.  Special thanks to Dr. Lee Burras, professor from Iowa State University, for a memorable and educational class!