“North Dakota Legendary” is more than a tourism slogan for the State of North Dakota. It’s a way of life. 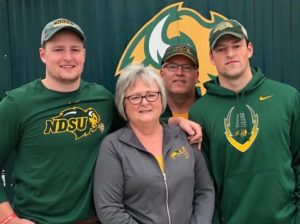 “Our oldest son, Abraham, played quarterback throughout his high school football career. Our youngest son, Jackson, played full back and middle linebacker in high school. They won the Class A High School Championship in 2014, and we thought, ‘It can’t get any better than this,” says Dave Hankey, a fourth generation farmer and owner of Hankey Seed Co. in Park River, ND.

Upon graduating from Park River High, Abraham followed in his parents’ footsteps by majoring in Agricultural Economics at NDSU. Jackson planned to do the same, but he also had the goal of playing football at NDSU. Jackson never considered attending another college or playing football anywhere else. You might assume success came easily if you only read the headlines like this one, “Hankey leaving NDSU as one of its best defensive players. 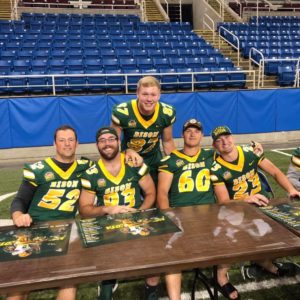 Jackson Hankey with his NDSU Teammates

Jackson’s story is one of perseverance. Despite being a standout high school athlete, he began his Bison football career as a walk-on. Jackson earned academic scholarships, but it took him two years to earn a football scholarship. As quarterback of the defense, he had to learn the Bisons’ complex defensive scheme. Jackson didn’t play at all his freshman year. After his freshman red shirt year, Jackson became the backup middle linebacker in his sophomore year.

Year three on the NDSU football team was a turning point for Jackson. He became a three-year starter and two-time team captain. He was part of four national championship teams during his five years at NDSU. He holds a Top 10 spot for career tackles at NDSU.

The highlight of Jackson’s football career was 2019-2020 championship game where he won the Elite 90 award, which is given to the athlete with the highest grade point average (GPA) in each of the NCAA’s national championships. Jackson also was the leading tackler at the 2019 national championship game. For the 2021 season, Jackson was among the 50 student-athletes selected to the Football Championship Subdivision Athletics Directors Association (FCS ADA) Academic All-Star Team. He started all 14 games during the 2021-2022 season and was NDSU’s leading tackler for the third straight season.

While many people expected him to continue his football career, Jackson feels called to do something else. He graduated in 2020 from NDSU with a bachelor’s degree in Agricultural Economics. While playing football this past year, Jackson has been working toward a Master of Business Administration (MBA). He’s four classes away from earning his MBA, but Jackson is focusing his attention on theology as he plans to enter ministry. He also is engaged to marry Mikayla Koenig (pronounced co-neg), a member of the NDSU women’s cross-country team. They met through Fellowship Christian Athletes (FCA).

Gaining life experiences and engaging in life-long learning is what the Hankey family does. After graduating from NDSU in 1985 with a degree in Ag Economics, Dave Hankey earned his MBA from the University of Santa Clara. He worked for a few years in San Francisco before he grew tired of the traffic.

“I couldn’t afford to live downtown, so I had to commute. I got on a train at 6:30 a.m. for an 8 a.m. job. That was a good experience to try something different, but I was always interested in keeping our farm in the family,” explains Dave, who returned to North Dakota when he was 25. “My dad and his brother farmed together for years, and my uncle didn’t have anyone to take over for him.”

“We built our seed processing facility in 1987,” adds Dave. “Our operation was very time and capital intensive at the time because we were also raising potatoes in North Dakota, Minnesota and Illinois. I was spending a lot of time overseeing production crews, but that wasn’t my passion.”

When his father fully retired in 2003, it was time to reevaluate the business. Running a multi-state potato business was taking Dave away from his wife, Jana, and their two sons. He wanted to focus on seed production, which he enjoyed. It also allowed him to be home every night. Win-win.

“We raise wheat seed, soybean seed, sugar beets and corn/canola depending on the year. We also process soybeans and wheat,” says Dave, who once again finds his family’s farming operation in a transition as his oldest son Abraham makes plans to return to the family’s agricultural business.

After graduating with a degree in Ag Economics from NDSU, Abraham earned a degree from the University of North Dakota (UND) Law School. His long-time girlfriend, Haylee Borgen, also is a UND law student. Abraham plans to return to the farm after he passes the bar exam. He has a passion for farming, especially precision farming. Abraham also likes to travel, golf and bow hunt.

“We’re looking forward to having Abraham take on more of the day-to-day responsibilities,” says Dave, who plans to spend more time traveling with Jana during the winter months. “There are just some people you work well with, and Abraham and I work well together. We speak the same language. He understands what I want done, and he is able to communicate that better than I can to our employees. He’s a better communicator than I am, so it will be interesting to see how this all works.”

Hankey Seed Co. also is transitioning away from North Star Genetics, where Dave was a shareholder and owner for more than 20 years. 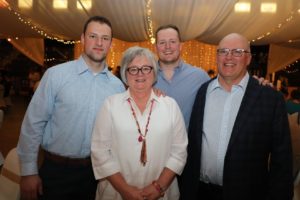 “We were looking for a seed partner that could offer us access to both Enlist and Xtend,” says Dave. “The more we researched family-owned Latham Hi-Tech Seeds, the more we liked what we saw. We interviewed a couple other seed companies, but we chose Latham Seeds for a couple of reasons. Latham has proven performance, and we can process the seed that we grow. We appreciate that Latham Seeds is a family-owned, Midwest-based company. We’re looking forward to learning more about Latham and growing together.”

When the Hankey family isn’t in the farm field or at the football field, they enjoy sitting down to meals together. Today they’re sharing with us one of their family’s favorite recipes: Spaghetti Pie.

This recipe can be easily refrigerated or frozen. Extend the baking time of an additional 30 minutes if cold.