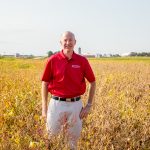 Nearly everyone agrees that dicamba injury to susceptible soybean is worse in 2020 since the introduction of dicamba-resistant soybean in 2017, and even since dicamba was first registered in the 1960s. Dicamba injury can occur from particle drift, volatilization (vapor drift), use of sprayers contaminated with dicamba residues, and movement of the herbicide with water running off treated fields. While not always easy, the first step in dealing with dicamba injury should be determining the most likely source of dicamba. 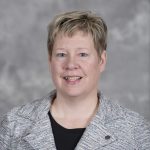 In several areas of the state, including north central Iowa, it is apparent that volatilization of dicamba was a leading cause of soybean damage.  All susceptible soybean fields in many neighborhoods were damaged, and the injury was uniform from fencerow to fencerow in many, if not most fields.  When particle drift is responsible for injury, damage to soybean is usually most severe near the field sprayed with dicamba and lessens as distance from the treated field increases. If a contaminated sprayer was the source, injury typically is worse where sprayer overlaps occur and absent where skips occur in the field.

So why were problems so much greater in 2020 than the first three years of using dicamba in soybean? We believe several factors contributed to the problem.  First, corn and soybean planting occurred at a near record pace – 94% and 66% of soybean were planted by May 3 in the region, resulting in the crops emerging and developing together early in the season.  Dicamba use in corn has increased in recent years due to a continued spread of herbicide resistance, and in many fields dicamba applications were made later in corn than normal after earlier treatments failed to provide control. Dicamba products used in corn do not have separation or downwind application setbacks and these formulations are known to be more volatile.  These factors resulted in dicamba being applied to both corn and soybean fields in an area at the same time, dramatically increasing the amount of dicamba available to move into the atmosphere. 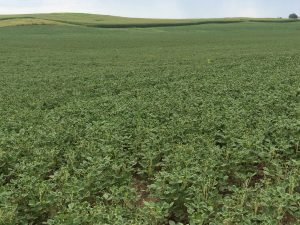 In addition to increased dicamba use, weather conditions made it difficult to complete postemergence herbicide applications during favorable conditions.  At Kanawha, in the first two weeks of June there were only 40 hours with wind speeds allowable for dicamba applications in soybean.  This resulted in large amounts of dicamba being applied in a short time frame. In addition to high winds, high temperatures were common throughout June and the lack of rain left dicamba on soil and plant surfaces where they can evaporate and move off the field into adjacent areas.

The combination of increased dicamba use across the landscape and favorable conditions for volatilization led to a process that has been called atmospheric loading. Rather than dicamba moving from a single field during or after application, it is thought injury to susceptible plants is due to dicamba coming from multiple fields in an area.  The quantity of dicamba leaving a single field might not have been sufficient to cause an adverse plant response, but the dicamba moving from multiple fields exceeded the threshold needed to cause injury.

What should you do if you suspect you have injury to susceptible beans, trees, gardens, horticultural crops or other susceptible plants?  Your first step is to review your own herbicide use in corn and beans or weed control in road ditches to assess if you used the wrong product on the soybeans, if your use of dicamba products in your corn could have led to tank contamination that subsequently injured your beans or landscape weed control product could have injured plants.   If you can rule this out, your next step is communication with your neighbor to determine if their use of dicamba could be the source.  This is not always an easy task and serves as a good reminder to keep those lines of communication open.  The next step is to call the Iowa Department of Agriculture and Land Stewardship’s pesticide bureau to file an “Incident Report”. The report must be filed within 60 days after the alleged date that damage occurred and before 25% of the crop is harvested. Contact the pesticide bureau at 515-281-8591.

In many situations, Extension field agronomists, retail agronomists, crop consultants and others are called to provide third-party opinions. Due to the widespread nature of this injury in 2020, it should be noted that pinpointing a source or sources may be nearly impossible.

What is the future for dicamba? Nobody knows how this year’s problems will influence dicamba availability for use in soybean in 2021.  Even without the court ruling in early June that vacated registration of three of the dicamba products used in soybean, the products were up for review following granting of a second two-year probationary label for 2019-20.  Bayer and other companies are continuing to evaluate new dicamba formulations with lower volatility than the current products.  Hopefully EPA will announce their decision in time for people to make appropriate decisions regarding soybean traits for the 2021 growing season, but based on past history, this may not happen.

Find resources by state for dicamba damage investigation below: