Soil Crusting and Leafing Out Underground 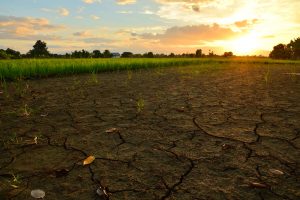 Most often the result of heavy rainfall, soil crusting presents itself in the form of hardened soil with a smooth and compacted appearance. Heavy rains following planting along with high heat and winds can cause finely tilled soils with limited residue cover to form a very dense crust. In addition, planting in wet soils and the use of heavy tilling are primary causes of soil crusting. Fine soils and soils with little organic matter are also more susceptible to the condition.

Hardened soil presents implications for water infiltration while also interfering with crop emergence. The coleoptile of a corn plant acts to protect leaves from emerging before the shoot penetrates the soil. When soil crusting occurs, this can cause leaves to emerge prematurely through the coleoptile below the soil instead of above ground – also known as “leafing out”. When the coleoptile ruptures before penetrating the soil, it becomes much more difficult for leafing out to occur above ground.

The hypocotyl of the soybean plant may enlarge as it pushes against the crust and can eventually snap and kill the plant. If you notice a swollen hypocotyl, that soybean plant is trying harder than normal to break through the soil.

Leafing out is often seen in the form of a “shepherd’s crook” when the coleoptile ruptures prematurely and prevents leafing out above ground. The decreased vigor resulting in premature leafing out can lead to uneven emergence and ultimately reduce yield.

No-till or minimum-till can reduce the amount of soil movement in times of heavy rainfall, preventing the onset of crusting. In addition, improving surface soil structure can be done by adding organic matter using cover crops or manure.

Using a rotary hoe at the depth of the crust can break up the soil, allowing seedlings to emerge. This practice can also act as a means for weed control prior to their emergence. By using a combination of approaches, soil crusting can be eliminated to avoid leafing out below ground.