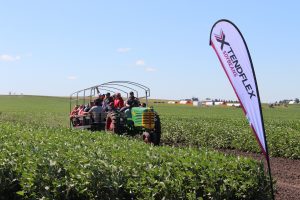 Reports from around the seed industry indicate that Bayer CropScience is close to being granted approval for its new XtendFlex® soybean system. This new technology will be the first triple-stack soybean trait with tolerance to glyphosate, dicamba and glufosinate (Liberty®) herbicides. Pre-launch ads from Bayer cite advanced genetics and greater flexibility for weed management options.

Latham Hi-Tech Seeds in 2019 was granted a sneak peak of six XtendFlex soybeans at our research farm near our headquarters in Alexander, Iowa. This test was conducted under the guidelines of an EPA-stewarded trial where the resultant soybean crop was harvested for data purposes but was then destroyed, so it could not reach the global supply chain.

The six soybeans we tested ranged from 1.9 to 3.0 in maturity and were compared to 14 soybeans that were in our lineup at that time. The test was split by herbicide tolerance. The same six XtendFlex lines were tested against 14 Liberty-tolerant products, including Enlist E3™, straight LibertyLink® and LLGT27™. They were also tested against 14 soybeans that were all tolerant to glyphosate: Roundup Ready® 2 Yield (RR2Y), Roundup Ready® Xtend®, Enlist E3 and LLGT27. 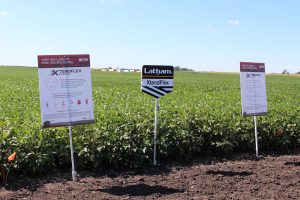 On the glyphosate-tolerant side of the trial, the yield of XtendFlex products ranged from 55.84 to 64.13 bu/A; the average yield was 61.67 bu/A. The yield of current products ranged from 54.70 to 69.37 with an average of 62.33 bu/A. NOTE: Due to late planting and other environmental factors, the later-maturing soybeans (2.8 to 3.0) in both sides of the trial struggled to reach full maturity and really suffered from a yield standpoint.

In general, I am pleased with the results of this trial. This was one location for only one year, but it did tell us that the first wave of the XtendFlex products tested in 2019 performed very well.

Pending full approval, there should be some very solid lines available for Latham farmer-customers for 2021 commercial planting! The last hurdle for full global approval of XtendFlex soybeans is the European Union at press time of this article. Bayer is optimistic this will be resolved in time for planting. We’ll keep you posted when we know more about this exciting new technology!