Latham product team members have been busy traveling to our SuperStrip™ and other research plot locations across the Upper Midwest.

It’s our job to take notes to help our company offer the best possible product lineup, as well as to assist our customers in choosing the best products for their given situations. 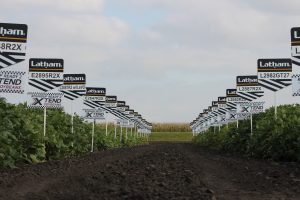 We also encourage you to take notes on your own fields to help identify your seed needs for next year. We recommend keeping an eye out for the following:

Physoderma in corn: While this isn’t a new disease, it’s been getting more publicity recently because some fields have suffered economic damage. Physoderma is a soil-borne fungus that seems to surface when there are warm early season temperatures followed by rainy periods, causing water to sit in the whorls during the v5 to v9 stage. Sporangia release huge amounts of zoospores that can literally swim their way to attack plant cells. Leaf symptoms include yellow-to-brown spots on the leaves and dark purple oval spots along the midrib. The real damage happens on the lower nodes of the plant that become weak and thus susceptible to breakage. Look for a brown to black ring of decay around the node. I’ve heard reports of fields in Illinois where 75% of the plants have broken. While physoderma seems to be more of a problem on the eastern side of our area, it has been identified in Nebraska.

Soybean Gall Midge: This insect pest is so new that entomologists aren’t entirely certain what species it is. It was reported in Nebraska in 2011 and South Dakota in 2015. Just last fall SGM was recorded in 69 counties of Nebraska, Iowa, Minnesota and South Dakota.

Sudden Death Syndrome and White Mold: Scout your fields all the way to maturity, So you don’t have any big surprises come harvest. Also remember to plant Latham® IRONCLAD™ products in these affected areas in the future. I’ve heard of some areas In southern Iowa and northern Illinois that are showing signs of Frogeye Leaf Spot, but I haven’t seen any of those myself – yet!

Weed resistance continues to be a growing issue. Last year I noticed serious problem fields in Wisconsin. Previously, Wisconsin farmers controlled weeds with glyphosate and some tank mix combinations. It’s becoming very obvious that weed resistance in Wisconsin is catching up quickly with the rest of the Upper Midwest. Exercise your weed control options in 2019 with Independent Latham Hi-tech Seeds.