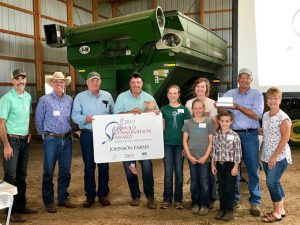 Alan Johnson of Frankfort, SD, converted his operation to no-till 33 years ago, which astonished some area farmers at the time because it was against the norm. Recently, Johnson Farms was awarded the South Dakota Leopold Conservation Award for voluntary conservation efforts.

“I initially converted to no-till to save moisture. I was tired of my crop drying up, and I knew there was a better way to farm that would conserve moisture and nutrients and still raise a crop. Because I was farming by myself at the time, no-till helped save me labor,” says Alan, whose son, Brian, joined the family farming operation after graduating in 2004 from South Dakota State University with a degree in Ag Business.

The Johnsons integrated cover crops and rotate crops, including corn, soybeans, oats, wheat and barley. They’ve noticed better weed control, less soil erosion and improved soil structure. They’ve also found synergy between cover crops and cattle. Their cattle graze the mature cover crops in the fall, as well as on corn stalks after harvest. Manure gets incorporated into the fields, which enhances the symbiotic relationship between the cattle and the land. 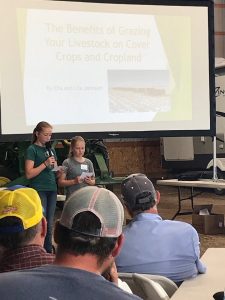 Brian and Jamie Johnson’s four children enjoy helping on the farm and growing their herd of Angus cattle. Here their older daughters, 12-year old Ella and 10-year-old Lila are giving their 4-H speech about “The Economics of Integrating Livestock on Cropland” to those attending the family’s conservation award ceremony. Not pictured is 3-year-old Evelyn.

“Since we started planting cover crops 10 years ago, the ground has mellowed,” says Brian. “Organic matter and water infiltration have increased, which has allowed our soil to withstand the extremes of drought in 2017 and 2018 to excess water in 2019.”

Brian credits the use of cover crops for providing valuable soil nutrients and for breaking up soil compaction. He and Alan retrofitted a planter to seed the cover crop into bio strips into 20-inch rows, which better accommodates their seed blend of radishes, lentils and vetch. You can learn more about the Johnson’s bio strips, cover crops and other aspects of their farming operation in a six-part video series entitled, “Soil Health Applied.”

The Johnsons also use precision ag technology to manage their fields by zone. They apply variable rates of fertilizer and seed.

“One thing I admire about Dad is that he’s always looking for ways to improve,” says Brian. “Thirty years ago, he planted corn at 18,000 plants per acre. Now we’re averaging 37,000 in 20-inch rows, and it’s taken our yields to the next level. With improved plant genetics and soil fertility, I don’t think we’ve hit the top yields yet!”

The Johnson family continues to strive for higher yield, but they’ve already set yield records. In 2016, they topped the South Dakota Soybean Yield Contest at 81.33 bushels/acre, in the Group 0 No-Till Category.

Fall harvest is a time when the whole family helps. Alan’s wife, Mickie, and Brian’s wife, Jamie, take turns driving the combine and operating the grain cart. Jamie also has served since 2017 on the board of the South Dakota Soybean Association. In the summer, Jamie and the four children help Brian synchronize and artificially inseminate (AI) the cattle, as well as move the cattle through their rotational grazing paddocks. Grazing cattle is good for the environment because they often graze ground where crops can’t be grown. Grazing also helps stimulate the growth of grass and prevents woody shrubs from overpopulating. In addition, manure helps fertilize the pasture. 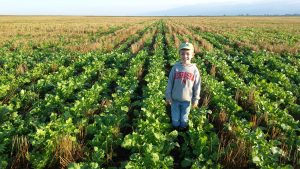 “If we’re good to the environment and good to the soil on our operation, it’s something that we can continue for the other generations,” says Alan.

Brian’s children, who would be the fifth generation to farm this land, show an interest in growing their family’s legacy of farming and conservation.

“There’s nothing like living on a farm,” says Brian. “You see how things grow and mature. I enjoy watching crops progress through the summer. Our kids are learning the importance of doing a job correctly, and they feel a sense of purpose by helping.”

In honor of the Johnson’s conservation award, today they’re sharing with us a favorite family recipe for Whole Wheat Bread.