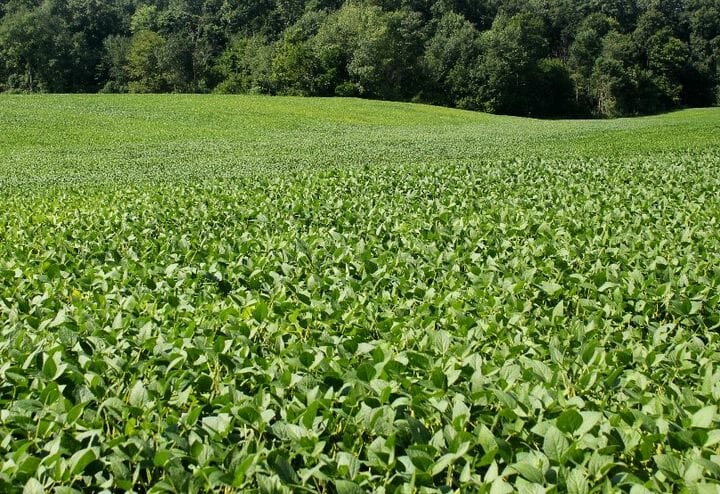 Nitrogen is a mobile nutrient, moving throughout the entire plant. It moves to the newest leaves first, leaving the oldest leaves more susceptible to deficiency. In nitrogen-deficient soybeans, the lowest leaves will appear a pale shade of green or show signs of yellowing. Some leaves will also have dark green veins.

Be sure to check nitrogen levels in the soil before R1. As nodules can appear as soon as V1. Check the health of nodules by squeezing them open. If A pink color on the inside indicates that nodules are active and healthy.

A single bushel of soybeans uses 4.2 pounds of nitrogen. Purdue University observed a 38% decrease in yield from nitrogen deficiency – a decline from 65 bu/acre to 40 bu/acre. Rhizobia population can carry over from season to season and continue to support soybean growth. We advise applying inoculant in fields where soybeans have not recently grown. The inoculant can help to stimulate rhizobia activity and promote nodulation.

It is advised to apply 20 to 40 pounds of nitrogen per acre during the R3 growth stage. However, applying nitrogen at planting – especially too much nitrogen – does not increase yield and can actually reduce nodulation. It’s important to determine the best nitrogen application and treatment plan to fit your unique needs. Contact your Data Forard™ Advisor or Latham Representative to discuss your options.