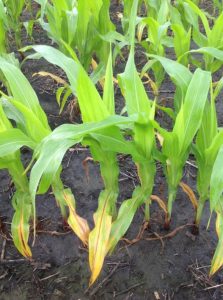 Nitrogen is an essential nutrient and its depletion can lead to severe yield loss. Nitrogen deficiency can be difficult to spot as different hybrids exhibit different symptoms. Most corn plants deficient in nitrogen will exhibit pale-yellowish leaves with a spindled appearance.

Nitrogen is a mobile nutrient and moves to the newest leaves first, leaving the oldest leaves more susceptible to deficiency. By moving from the oldest to youngest leaves, signs of yellowing will often form a “V” pattern on the plant leaf.

Cold or saturated soils are the primary causes of nitrogen deficiency in corn. Periods of heavy rainfall increase nitrogen leaching, depleting saturated soils of the vital nutrient. Aside from soil leaching, nitrogen can be lost through denitrification – where the nutrient is converted to a gas form and lost in the atmosphere.

When soil conditions are dry, sandy or poorly fertilized, early-applied nitrogen fails to be absorbed by plants. Insect diseases that injure root systems can further prevent proper absorption of nitrogen and lead to deficiency.

Other unavoidable circumstances happen later in the growing season when the increase in plant height and density can block sunlight absorption and reduce photosynthesis. This leads corn to use nutrient reserves within the plant, which will weaken stalks.

60% of the nitrogen needed to support corn growth is built-up between V4 and pollination, making this an important time to monitor for deficiency. Scouting for nitrogen deficiency should also take place after episodes of heavy rainfall.

While having negative implications on yield potential and crop quality, nitrogen deficiency can also contribute to other corn disorders including tip-dieback and kernel abortion. Plants that are nitrogen deficient will cannibalize their stalks to compensate for the nutrient loss. This makes stalks more vulnerable to lodging and pinching.

Tissue sampling can provide insight into how severe deficiency is. When testing for nitrogen deficiency in corn, gather samples from different areas of the field to compare nitrogen levels in deficient corn with healthy plants.

Nitrogen deficient corn should be harvested early in order to prevent additional yield loss from stalk lodging. When planning for next year’s crop, avoid planting hybrids with a history of poor nitrogen uptake. Some hybrids also demand a higher level of nitrogen during grain fill than others, so it is important to consider when planning for the next crop.

Be sure to consult with your local Latham representative to determine the best plan for managing nitrogen deficiency in corn.