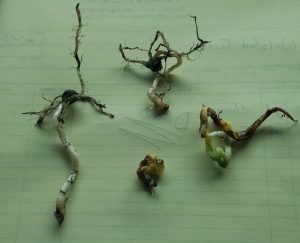 Imbibitional chilling occurs during the process by which crops absorb water prior to germinating, a phase known as imbibition. Under optimal conditions, seeds should be planted when soil temperatures are above 55°F. When seeds are planted in soils below optimal temperature, the uptake of cold water can damage cells and cause seeds to rupture. This can lead seeds to become shriveled and cause seedlings to emerge late, in a corkscrew shape, or not at all.

If an injured seed eventually develops into an emerged seedling, it can become more vulnerable to disease or damage from herbicides. The risk of imbibitional chilling especially increases when soil temperatures fall below 50°F. Imbibitional chilling or cold injury can occur within 24 to 36 hours of planting, making the relationship between planting timing and soil temperature critical.

As the injury to seedlings occurs after planting, there is little preventive action that can be taken aside from planting when soil temperature is optimal. In the best case, if enough time is afforded between planting and the drop in soil temperature, a seed is less likely to undergo chilling if it is able to absorb warm water. There are ways to determine if imbibitional chilling has occurred after planting. When scouting, look for signs of inconsistent emergence. If a plant looks to be missing, dig into the soil around the area to see if a seedling can be found. If it has a corkscrew shape, underwent leaf emergence below ground, or is missing parts, these are also signs of imbibitional chilling. Delayed emergence of a seed can be the result of reduced seed vigor that can result from imbibitional chilling.