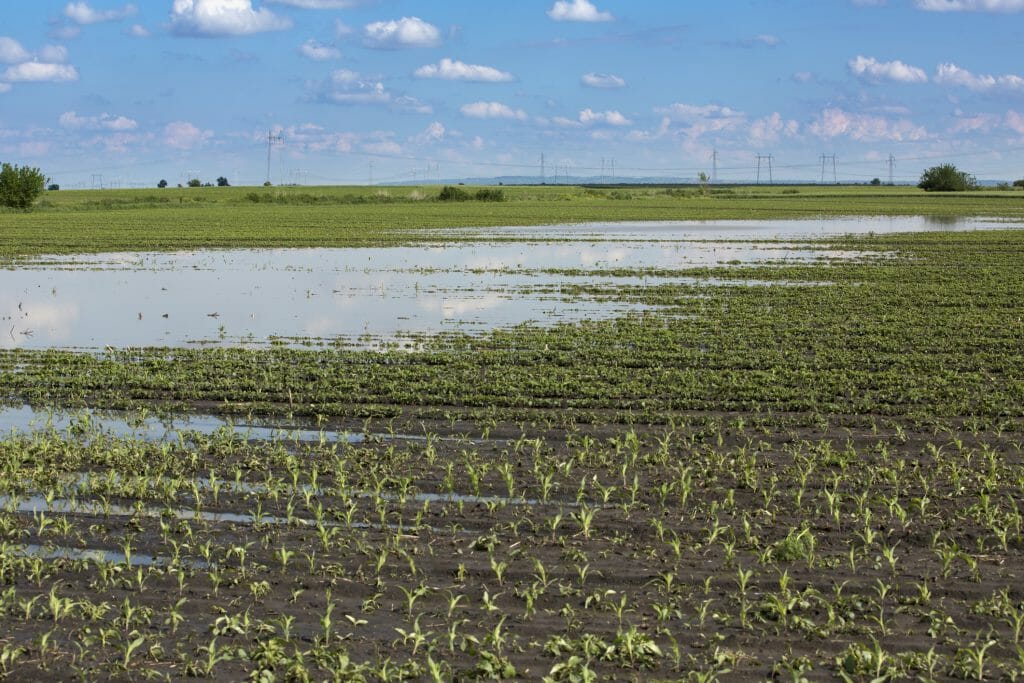 For corn and soybean plants before and after emergence, flooding and saturated soils can jeopardize yield. Germinating seeds require oxygen to survive. After the first 48 hours following a heavy rain or flooding event, oxygen levels in the soil will become entirely depleted and prevent seeds from germinating and continuing to grow.

Yield loss for corn and soybeans depends on the duration of the flooding event and at what growth stage it occurs. The longer a plant is submerged or growing in saturated soil, the less likely it is to survive. Generally, smaller seedlings with lower stamina are less likely to survive following a heavy rainfall event compared to larger seedlings.

Warmer temperatures are associated with higher growth rates, and as a result, a higher amount of oxygen is used. When temperatures exceed the mid-70° range, survival may not exceed 24 hours following the heavy rainfall event.

Before V6, the growing point is below ground and damage from flooding is more likely to impact yield or kill the plant.  After V6, corn plants fair better in saturated conditions if some of the plant is out of the water. However, the higher temperatures can speed up respiration and oxygen requirements, leading to more plant damage compared to cooler temperatures during a flood event.

Nitrogen loss is another way flooding impacts corn yields. Corn consumes two-thirds of its nitrogen by the start of the reproductive stage and relies on a functional root system. If a flooding event compromises plant roots, yield can be reduced significantly. Research from Iowa State University found that a 30-inch corn plant that had been flooded for 48 hours with minimal nitrogen uptake experienced a 20% reduction in yield. Flooding can also promote seed decay, crazy top that exhibits proliferated tassels, stunted ears or completely barren plants

For soybean plants at stages V2 or V3, survival is possible. However, nitrogen fixation can be restricted and reduced yield is still likely. For soybeans submerged for less than 48 hours, yield loss is rarely observed.

Once the first bloom appears at stage R1 the number of pods per node will be greatly decreased if sitting in saturated conditions. Wilting, stunting and yellow-leaves will be expressed in damaged or dying soybean plants. Further, research has found that greater yield reduction has been observed in soybean plants grown in heavy clay soils as opposed to silt loam soils.

Flooding and prolonged saturated soils pose the greatest threat to young plants that have yet to emerge above ground. As water recedes, any remaining residual mud on corn and soybean plants can reduce photosynthesis. For plants that survive a flooding event, they will be more vulnerable to diseases and stresses over the course of the growing season.

The survival outlook for saturated seeds and germinating plants will not exceed four days. Plants that survive after water levels recede will continue to grow within three to five days.