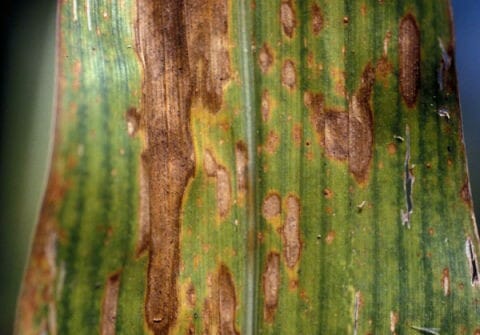 Colletotrichum graminicola is a fungal pathogen that causes anthracnose leaf blight. Anthracnose leaf blight is a foliar disease that appears in the early and late stages of growth in corn plants. The fungus survives in infected corn residue that remains in the field over the winter. The disease creates elongated lesions with a dried, brown appearance across the length of the leaf blade and is bordered by a darker reddish-brown color.

Anthracnose leaf blight develops predominately from the infected residue left behind in the field. No-till, reduced till and corn on corn rotations can increase the likelihood of the disease to emerge. Though no-till and reduced-till methods are critical for preventing erosion and other corn disorders, it can lead to the accumulation of corn debris that is conducive for housing the fungal pathogen.

The fungus thrives in a warm and wet environment. Moisture from rainfall will often create black specks that appear across the lesions. Wind can also act as a transportation method for the fungus as spores can travel by air or water.

The disease will infect at the seedling stage, causing foliar damage, and end at the growing season, causing stalk rot. Although anthracnose leaf blight has the potential to occur later in the growing season, early signs of the infection do not guarantee that it will resurface closer to harvest. Iowa State University researchers state that because of the early-season nature of the leaf blight, impacts on yield are rarely demonstrated. The late season stalk rot phase of the disease tends to be more detrimental on yield and harvestability.

Crop rotation and the use of resistant hybrids are the best ways to combat leaf blight. Fungicides can keep anthracnose leaf blight in control, but it likely will not be effective for combatting the stalk rot phase. Further, corn hybrids that provide resistance against the earliest stages of leaf blight are not often effective for preventing the onset of late-season stalk rot.

If tillage is used, methods that bury infected corn residue can prevent leaf blight from emerging again during the next season. Crop rotation has also been deemed as an effective way to prevent the continued onset of anthracnose leaf blight. For corn that has perpetually been impacted by leaf blight, two-year rotations away from corn are also advised.