Pollination is nearly complete in Eastern Iowa and Western Illinois. Gray Leaf Spot is showing up with the hot, humid conditions we have had in the last few weeks. Scout for GLS and make fungicide decisions. 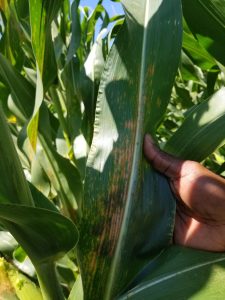 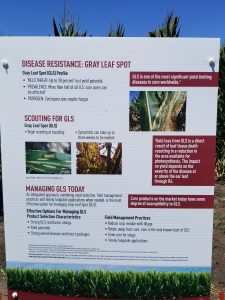 We had a great turnout at an in-field agronomy training in Central Iowa. Dealers were thrilled to gain tangible agronomic information to bring back to both their customers and their own farm. 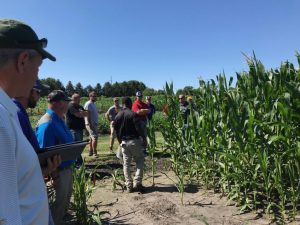 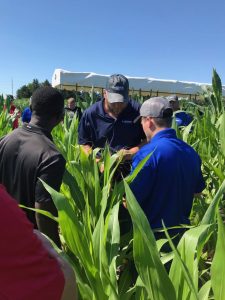 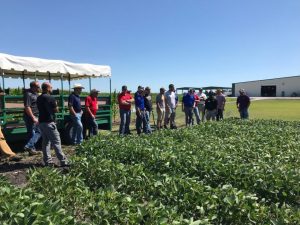 The soybeans in this LibertyLink® SuperStripTM plot in Mitchell County are coming along really well. Fungicide is going on a lot of corn fields. Some fields look spotty after all the rain we received earlier, which caused nitrogen lost. 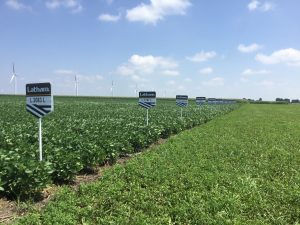 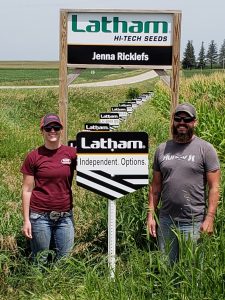 This nice looking field of Latham® 1787 LL soybeans were no-till drilled into cereal rye on June 20 near Garner, Iowa. 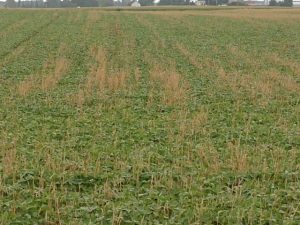 The 2018 growing season has been a challenge in Northwest Iowa. Initial crop planning and seed placement didn’t necessarily come together due to weather conditions. With the help of Climate FieldView, we can make sure we scout fields and place signage appropriately. These L 1958 LL are well worth showing off with a field sign! 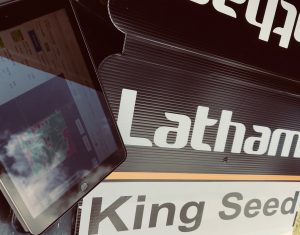 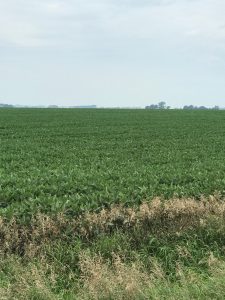 An estimated 30,000 RAGBRAI riders rode past on Sunday past Latham® corn and soybeans plots on Hwy 37 east of Turin in western Iowa. 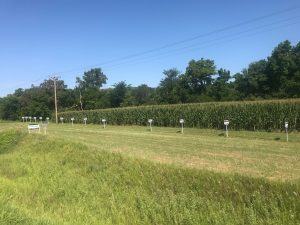 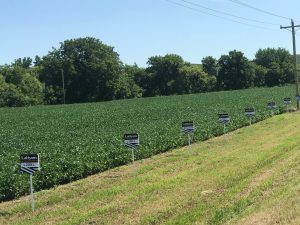 Pollination has mostly wrapped up in this SuperStrip Corn Plot in Cambridge, Wisconsin, that was planted on May 8.  You can see the different varieties on the left of the picture.  So far LH 5742 RR is visually the clear standout, but I’m looking forward to seeing what tops this plot for yield when the combine rolls.

Up to this point in the growing season, I haven’t seen much for disease pressure in the fields. The crops continue to impress me in fields where there was not excessive moisture. 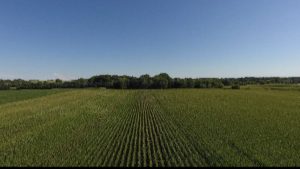 Crop conditions are still good across the bluffs of Minnesota and Wisconsin.  Areas to the north across Wisconsin Highway 10 are very dry.  Fungicide applications have been in full force on both corn and soybeans.  While checking on a Latham® SuperStrip in Menomonie, WI, I took some footage of an aerial application of fungicide on corn with a helicopter. The tender truck driver was very kind and answered all my questions. He said the helicopter has about a 200-gallon tank and sprays 5-7 gallons per acre.  They spray several fields in the area but are very selective of which ones.  That same day I saw a Haggie covering a corn field in Minnesota where the corn was equally as high as the floor on the cab. 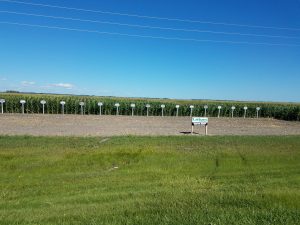 This farmer near Wessington Springs, South Dakota, flew on a cover crop of radishes and turnips into standing corn just before tasseling. At the same time, he applied nitrogen. You can see emergence was great, and his cover crop will have plenty of growth well before the corn will be harvested. Farmers in this area have had ample rain fall this year, so there are some amazing looking crops. This year is a huge turn around after last year’s drought. 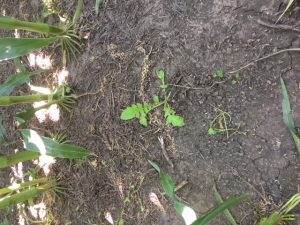 More rain fell this past week in parts of Northeast South Dakota. Six to seven inches fell at Brookings and Gettysburg, causing flooding. Unfortunately, other areas are still very short on moisture. Most corn has pollinated and kernels are beginning to fill in the blister to milk stage. Soybeans are nearly canopied and pods are starting to form. 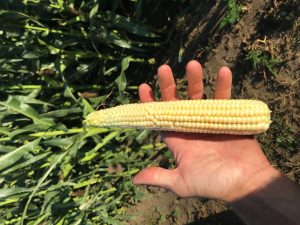 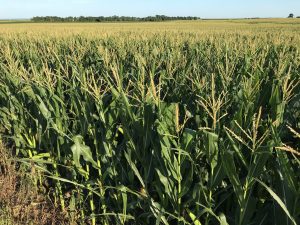 LH 5175 VT2 PRO DG looks great even with abundant moisture. Although this area has been dry, 6.5 inches of rain caused flooding at Gettysburg. 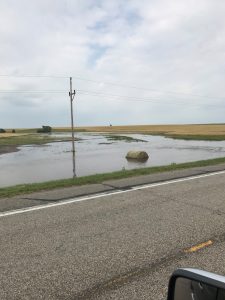 Looks like a double crop, doesn’t it? This is a perfect example of a “resistant weed” that we deal with in North Dakota that is unique to our rotations and climate. Roundup Ready® Canola has become a trouble weed for corn/soybean growers throughout the region. Just like our more standard resistant weeds, the tiny seed of canola can remain in the soils for seasons and germinate at will. Fortunately, this problem can be controlled with a proper pre-emergence and weed control system.

Fields like this lose yield to weed competition. That’s why it’s important to keep previous crops, like Roundup Ready Canola and LibertyLink Canola, in mind when you’re crop planning for soybeans. Don’t just think about what crop you planted in that field last year; note whether you had a canola shatter event within the past seven years to avoid volunteer crops from growing. It’s important to talk about trait rotation and “weed control” with your seed rep or agronomist to keep your fields clean. 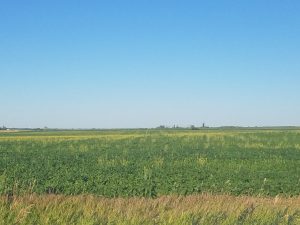