Young Wisconsin Dairyman is Living his Dream at Luchland Farms 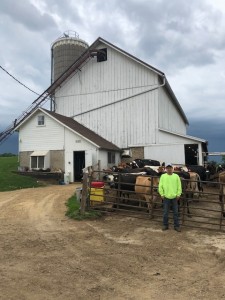 “I spent a lot of time with my grandparents on this farm, and I always enjoyed the cows,” says Darren, who says he feels blessed to live on the farm where his grandparents milked. The barn was empty for five years, and then Darren’s family purchased the farm about two years ago. “My grandpa always had Holsteins, so that’s what I started with. I’ve added some Jerseys to my herd to increase butter fat, which helps with the milk check.”

Because his milk gets sold to family-owned and operated Klondike Cheese Company, components like butter fat are important. Another way Darren is working to increase the butter fat is by feeding high quality forage to his cows. He’s especially looking forward to harvesting his first field of Latham’s LH 9700 alfalfa, which was planted on April 28 with peas and oats. 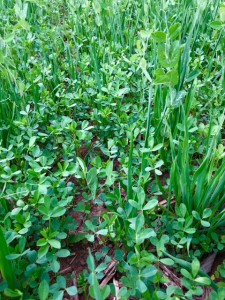 His grandpa, Gene Luchsinger, enjoys spending time on the farm with Darren and helping do anything that’s related to crops or equipment at Luchland Farms (pronounced Luck-Land. He leaves all the cow care and milking responsibilities in Darren’s hands.

In addition to his grandpa, Darren’s girlfriend helps take care of the calves. Another valuable hand is Annie the Red Heeler. Annie is responsible for bringing cows in from the pasture each morning and evening for milking.

Darren’s short-term plans include growing his herd, which began with 50 cows and has grown to 78. He recently took on a Latham® Seeds dealership to help him reach his goal of buying more cows. He says the dealership also helps diversify his farm income, as well as provides a cost savings on the seed he needs to plant to grow feed for his cows. In fact, all the crops he planted this spring will be fed on his farm.

“The Monticello FFA gave me lots of skills that I’m using,” says Darren, who participated in agronomy, dairy and soils judging. Skills gained in dairy judging are helping him evaluate his cows, and he’s raising all of his own stock. He just started an Angus beef herd with 15 head that he plans to sell direct. 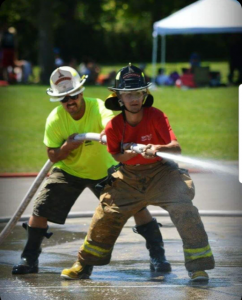 Although he’s working hard to make his dreams a reality, Darren also takes time to serve his community. He began serving as a firefighter in Monticello in high school and is in his third year. He said he came by it naturally because his parents were EMTs and now they’re both firefighters. In fact, his dad is the fire chief.

When he’s not busying dairying or fighting fires, Darren enjoys golfing and hunting for deer or turkeys. He also enjoys grilling and real Wisconsin cheese.

In honor of June Dairy Month and the summer grilling season, today we’re sharing a recipe for Brick Cheese Mexican Wrap. Also be sure to check out the Klondike Cheese Company’s website for unique recipes like the Harvarti Halftime Burger featuring dried cherries like those grown in Door County Wisconsin, and Odyssey® Feta Grilled Beef Filet with Creamed Corn.

Heat oil in heavy skillet over medium-high heat. Quickly saute pork chops or tenderloins, turning once, until cooked through, about 2 min. per side. Remove from heat. Salt and pepper to taste. Sprinkle oregano over the pork while hot, pressing into meat. Cut into pencil-size strips. Set aside. Heat the tortillas until soft and keep warm. Also heat the refried beans. Spread the surface of each tortilla with 1/4 cup hot refried beans, 1/3 cup shredded Klondike Brick cheese and 1/4 of pork. Layer the tomato, avocado, jalapenos, lettuce and cilantro, dividing evenly among the tortillas. In a small bowl, combine the salsa and mayonnaise. Dollop 2 Tbsp. of the mixture over each tortilla filling. Roll up tortillas tightly; cut each in half diagonally to serve.