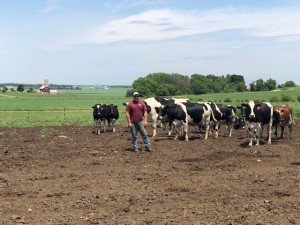 The 27-year-old farmer enjoyed a carefree childhood on the Wellnitz family farm just one mile south of Orfordville, Wisconsin. The only son of Mark and Tina Wellnitz, and the third oldest of four children, Alex’s days were spent helping his parents raise crops and livestock. They worked hard, but they also spent time fishing and hunting in between morning and evening chores.

While he was in high school, Alex was involved with 4-H and FFA. He showed dairy heifers, steers and crossbred hogs through 4-H. He also participated in FFA judging contests and enjoyed taking trips with the Parkview FFA to World Dairy Expo.

“Dairy judging helped me learn what to look for in breeding stock. It taught me skills that I use to evaluate and manage my cows today,” says Alex.

Life skills gained through 4-H and FFA, lessons learned while growing up on his family’s dairy farm, plus on-the-job training while working at Larson Acres all helped prepare Alex to take on the responsibility of managing his own acres and livestock at the age of 22.

“Dairying was all that I ever wanted to do,” says Alex. “I was working for Larsons in Evansville when I got the call that my parents had been in a motorcycle accident. I drove home as fast as I could, and I’ve been here ever since. You learn to grow up fast when something like that happens.”

Sadly, Mark Wellnitz passed away on Oct. 24, 2012. Three of his brothers helped guide Alex through the darkest days. “Uncle Tom gave me some good ideas. Uncle Phil helped me put in the crops for the first couple of years. Uncle Joe gave me a few pointers to make things go a little smoother.” 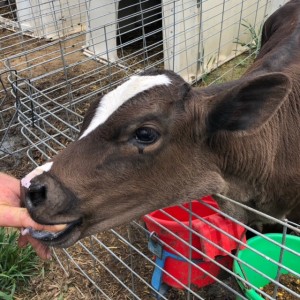 The Wellnitz family is close, both literally and figuratively. Phil and Patti live just down the road from the farm that Alex’s parents, Mark and Tina, purchased in 1987. Tina and her daughter Angela live on the home place, and it’s where Alex milks cows twice daily. Tina and Angela also work off-farm at The Sassy Farms Quilt Shop, which they opened in 2012 with a friend of Tina’s. Angela’s twin sister, Krista, lives in Orfordville with her husband. Krista is an Animal Science professor at the University of Wisconsin – Platteville. Their youngest sister, Jessica, lives in nearby Viroqua and works at Westby Cooperative Creamery. Jessica’s husband farms and also operates a custom baling and wrapping business.

The dairying tradition is strong in the rolling hills of Southwest Wisconsin. Living his legacy, Alex continues to sell his milk to Rolling Hills Dairy Producers Cooperative like his father did and like his Uncle Phil does. The dairy co-op has done away with volume premiums and is focusing more on milk components like butterfat. As a result, Alex is making some changes to his crop plan and his feed rations to raise crops that will help increase butterfat.

Alex milks 47 cows, all are Holsteins but one. The lone Brown Swiss was bought as a gift for Alex’s girlfriend, Karina, who takes care of the calves in addition to working full time at Juda Grain in Brodhead, Wisc. Beatrice the Brown Swiss this spring gave birth to Burt the bull calf. Although he’s had offers for Burt, Alex isn’t sure they want to part with the beautiful brown-eyed creature.

Step-wise growth is part of Alex’s plan. Most bull calves become dairy beef steers, which are then sold to a local market. His heifer to bull calf ratio is 4 to 1, which his helping herd numbers increase. Alex has 32 heifers that will soon be bred and then added to the milk line.

“I’m really fortunate to do what I love. I look forward to working with my cows every day, so it doesn’t feel like a job. I like being my own boss,” says Alex, who still makes time to catch pan fish, hunt for deer and turkeys, and go snowmobiling around his 6 AM and 6 PM milking schedule.

To help promote the Real® dairy products that he helps produce, today Alex is sharing a family favorite recipe for Éclair Cake. He says this recipe is his mom’s go-to dessert for any celebration and every holiday because it’s a favorite of her kids and grandkids.